END_OF_DOCUMENT_TOKEN_TO_BE_REPLACED

I Can't Breathe: A Killing on Bay Street (Hardcover) 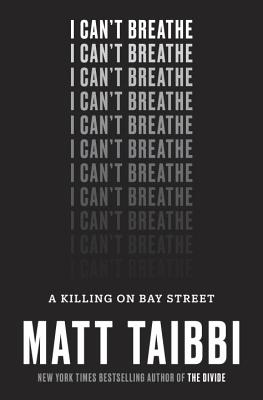 On July 17, 2014, a forty-three-year-old black man named Eric Garner died on a Staten Island sidewalk after a police officer put him in what has been described as an illegal chokehold during an arrest for selling bootleg cigarettes. The final moments of Garner’s life were captured on video and seen by millions. His agonized last words, “I can’t breathe,” became a rallying cry for the nascent Black Lives Matter protest movement. A grand jury ultimately declined to indict the officer who wrestled Garner to the pavement.

Matt Taibbi’s deeply reported retelling of these events liberates Eric Garner from the abstractions of newspaper accounts and lets us see the man in full—with all his flaws and contradictions intact. A husband and father with a complicated personal history, Garner was neither villain nor victim, but a fiercely proud individual determined to do the best he could for his family, bedeviled by bad luck, and ultimately subdued by forces beyond his control.

In America, no miscarriage of justice exists in isolation, of course, and in I Can’t Breathe Taibbi also examines the conditions that made this tragedy possible. Featuring vivid vignettes of life on the street and inside our Kafkaesque court system, Taibbi’s kaleidoscopic account illuminates issues around policing, mass incarceration, the underground economy, and racial disparity in law enforcement. No one emerges unsullied, from the conservative district attorney who half-heartedly prosecutes the case to the progressive mayor caught between the demands of outraged activists and the foot-dragging of recalcitrant police officials.

A masterly narrative of urban America and a scathing indictment of the perverse incentives built into our penal system, I Can’t Breathe drills down into the particulars of one case to confront us with the human cost of our broken approach to dispensing criminal justice.

“Brilliant . . . Taibbi is unsparing is his excoriation of the system, police, and courts. . . . This is a necessary and riveting work.”—Booklist (starred review)

Matt Taibbi has been a contributing editor for Rolling Stone and the author of five previous books, including the New York Times bestsellers The Great Derangement, Griftopia, and The Divide. He lives in New Jersey.

“A complex and textured examination of the complicated personalities, flawed legal system, and politics revolving around the police killing of forty-three-year-old Eric Garner, whose final words became a rallying cry for the Black Lives Matter movement.”—The Boston Globe, “Must Read Books for the Fall”

“[A] brilliant work of narrative nonfiction . . . [Matt] Taibbi is unsparing is his excoriation of the system, police, and courts that led to the fatal choke hold and worked to blur the abuse afterward. . . . This is a necessary and riveting work.”—Booklist (starred review)

“[A] searing exposé . . . After deeply exploring Garner’s life from a variety of perspectives, Taibbi offers detailed reporting about the out-of-control Staten Island police officers present at the death scene . . . [and]  the futile efforts of the Garner family to achieve posthumous justice. . . . What emerges from the author’s superb reporting and vivid writing is a tragically revealing look at a broken criminal justice system geared to serve white citizens while often overlooking or ignoring the rights of others.”—Kirkus Reviews (starred review)

“Matt Taibbi’s I Can’t Breathe marries the best instincts of explanatory narrative journalism with uncompromising moral clarity. The result is a riveting walk through decades of policing policy and big city politics that culminated, seemingly inevitably, in Eric Garner’s killing by the New York Police Department. While he may have set out to document a fatal injustice, the tale Taibbi tells is not one of a death, but one of a life. In capturing the fullness of Garner’s ‘imperfect humanity,’ I Can’t Breathe adds a vital account of police violence and a vivid exploration of its lingering costs. Taibbi, through thorough reporting and captivating writing, captures the totality of an American tragedy.”—Wesley Lowery, Pulitzer Prize–winning national correspondent for The Washington Post and author of the New York Times bestselling They Can’t Kill Us All: Ferguson, Baltimore and a New Era in America's Racial Justice Movement