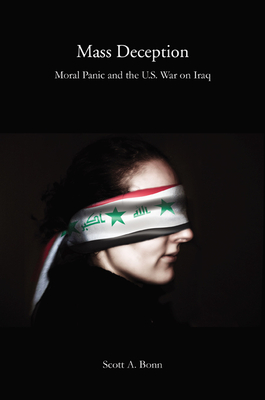 By Scott A. Bonn, Michael Welch (Foreword by)
List Price: $37.95
Our Price: $25.95
(Save: $12.00 32%)
On Our Shelves Now
The attacks of 9/11 led to a war on Iraq, although there was neither tangible evidence that the nation's leader, Saddam Hussein, was linked to Osama bin Laden nor proof of weapons of mass destruction. Why, then, did the Iraq war garner so much acceptance in the United States during its primary stages?

Mass Deception argues that the George W. Bush administration manufactured public support for the war on Iraq. Scott A. Bonn introduces a unique, integrated, and interdisciplinary theory called "critical communication" to explain how and why political elites and the news media periodically create public panics that benefit both parties. Using quantitative analysis of public opinion polls and presidential rhetoric pre- and post-9/11 in the news media, Bonn applies the moral panic concept to the Iraq war. He critiques the war and occupation of Iraq as violations of domestic and international law. Finally, Mass Deception connects propaganda and distortion efforts by the Bush administration to more general theories of elite deviance and state crime.

Scott A. Bonn is an assistant professor of sociology at Drew University.
"This book is a timely contribution to the emerging study of state crime. Bonn does a fine job of explicating moral panic and elite deviance arguments in the context of the Iraq war. A clear and compelling read."
— Gray Cavender

"Bonn offers a careful analysis of the post-9/11 build-up to the U.S. invasion of Iraq in 2003. This book should be of great interest to scholars in the sociology of deviance, communication, political science, and to the general public."
— Amie L. Nielsen

"An impressively documented and researched study of an immensely consequential topic that deserves a wide readership. Highly Recommended."
— Choice