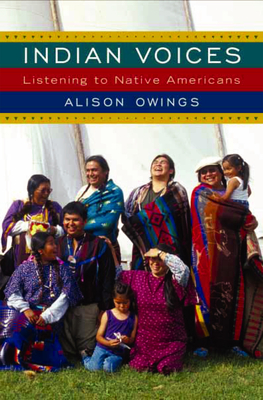 In Indian Voices, Alison Owings takes readers on a fresh journey across America, east to west, north to south, and around again. Owings's most recent oral history—engagingly written in a style that entertains and informs—documents what Native Americans say about themselves, their daily lives, and the world around them.

Young and old from many tribal nations speak with candor, insight, and (unknown to many non-Natives) humor about what it is like to be a Native American in the twenty-first century. Through intimate interviews many also express their thoughts about the sometimes staggeringly ignorant, if often well-meaning, non-Natives they encounter—some who do not realize Native Americans still exist, much less that they speak English, have cell phones, use the Internet, and might attend powwows and power lunches.

Indian Voices, an inspiring and important contribution to the literature about the original Americans, will make every reader rethink the past—and present—of the United States.

ALISON OWINGS is the author of Frauen: German Women Recall the Third Reich, a New York Times Notable Book of the Year (Rutgers University Press) and Hey, Waitress!: The USA from the Other Side of the Tray.
"This is the United States of Native America at its best! Owings brilliantly weaves together the grassroots narratives and heart-felt stories that she gathered in her travels throughout Indian Country. The result is a stunning and eye-opening book, written in page-turning prose, that reveals the emotions, pains, and humor of Native Americans. Whether you know nothing about Indians or just want to know more, you need to read this book!"
— Donald L. Fixico (Shawnee, Sac & Fox, Muscogee Creek, and Seminole)

"Alison Owings is a brilliant listener. Otherwise she wouldn't have been able to interview so many native people and have them talk about their lives, their dreams, their accomplishments with such intimacy."
— Jake Page

"Vital voices from Indigenous peoples have long been shrouded, interpreted, misinterpreted, or just plain ignored. Owings's humanity and journalistic instincts lead us where few non-Natives have ventured. Truly a must read."

"I loved Indian Voices. And it was great fun to read because it is about real people in contemporary times."
— Jacqueline Johnson-Pata (Tlingit)

"Owings assembles interviews with Native Americans from across the nation that achieve a remarkable level of intimacy. Her descriptions are rich in detail, her stories and statistics captivating. This engrossing, affecting book should be mandatory reading in American history classes.."
— Publishers Weekly (starred review)

"Alison Owings does an outstanding job of just what this book promises to address in the title, Listening to Native Americans. Owings is
a recognized journalist, and her work as an oral historian observing, listening, and sometimes participating in day-to-day American Indian life makes this book a welcome and must-read addition to the small number of books that focus on contemporary American Indians."

"An important (and entertaining!) new book on Native Americans that lets the real experts do the talking."

"Owings' writing can be summed up in one word: entralling. Her vivid prose brings the scenes and stories to life in detail."

"This is a model of what a good oral history book should be. Owings tells our stories honestly, eloquently and without her own baggage, and our people’s stories don’t pull many punches either. Survivance shines through in every chapter."
— John D. Berry

"Owings is a good writer and an even better listener. She manages to present the stories told by real-life Natives/Indians/Tribal People with attention to detail and as accurately as a person outside the culture probably could. She brings her own perspective to the stories and although these asides may make many Natives/Indians smile in all-too familiar recognition of encounters with non-Natives, they also help to illustrate the uniqueness of Native/Tribal culture. This book is an excellent addition to the ongoing conversation between Natives and non-Natives and it also enhances mutual understanding among the Peoples of this country."
— Native Peoples Law Caucus Newsletter

"Owings' chronicle is enlightening for all who wish to understand 'Where is Native America now?'"

"Many years of interviews and research have resulted in this book, an impressive sampling of contemporary lives of Native Americans. Focusing on 23 individuals from an almost equal number of tribal backgrounds, Owings is an engaging and skillful interepreter of each life story. Their stories are powerful and enlightening; their intimate nature probably has as much to do with the generosity of the people who participated in the project as with Owing's formidable skills as a researcher, interviewer, and writer. Highly recommended."

"A rich collection that is poignant, funny, heartbreaking, and very real. The vast diversity in Native America is evident. The book is engaging and thoughtfully conceived and effectively communicates Owings’s central thesis—that Native Americans are alive, well, and thriving and have much to teach and share with the rest of us. Recommended for all readers of nonfiction, and highly recommended for anyone living in or near Native communities."
— Library Journal