END_OF_DOCUMENT_TOKEN_TO_BE_REPLACED

Radicalism at the Crossroads: African American Women Activists in the Cold War (Paperback) 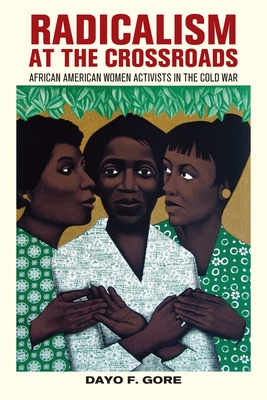 With the exception of a few iconic moments such as Rosa Parks's 1955 refusal to move to the back of a Montgomery bus, we hear little about what black women activists did prior to 1960. Perhaps this gap is due to the severe repression that radicals of any color in America faced as early as the 1930s, and into the Red Scare of the 1950s. To be radical, and black and a woman was to be forced to the margins and consequently, these women's stories have been deeply buried and all but forgotten by the general public and historians alike. In this exciting work of historical recovery, Dayo F. Gore unearths and examines a dynamic, extended network of black radical women during the early Cold War, including established Communist Party activists such as Claudia Jones, artists and writers such as Beulah Richardson, and lesser known organizers such as Vicki Garvin and Thelma Dale. These women were part of a black left that laid much of the groundwork for both the Civil Rights Movement of the 1960s and later strains of black radicalism. Radicalism at the Crossroads offers a sustained and in-depth analysis of the political thought and activism of black women radicals during the Cold War period and adds a new dimension to our understanding of this tumultuous time in United States history.

Dayo F. Gore is Associate Professor of Ethnic Studies and Critical Gender Studies at the University of California, San Diego and has previously taught at the University of Massachusetts at Amherst. She is the co-editor (with Jeanne Theoharis and Komozi Woodard) of Want to Start a Revolution? Radical Women in the Black Freedom Struggle (NYU Press, 2009).