END_OF_DOCUMENT_TOKEN_TO_BE_REPLACED

Lives on the Line: Dispatches from the U.S.-Mexico Border (Paperback) 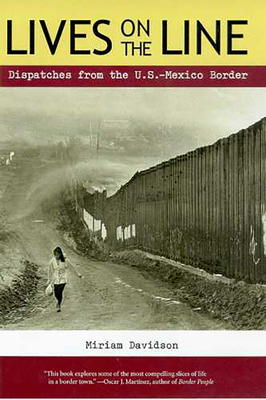 Straddling an international border, the twin cities of Nogales, Arizona, and Nogales, Sonora, are in many ways one community. For years the border was less distinct, with Mexicans crossing one way to visit family and friends and tourists crossing the other to roam the curio shops. But as times change, so do places like Nogales. The maquiladora industry has brought jobs, population growth, and environmental degradation to the Mexican side. A crackdown against undocumented immigrants has brought hundreds of Border Patrol agents and a 14-foot-tall steel wall to the U.S. side. Drug smuggling has brought violence to both sides. Neither Nogales will ever be the same.

In Lives on the Line, Miriam Davidson tells five true stories from these border cities to show the real-life effects that the maquiladora boom and the law enforcement crackdown have had on the people of "Ambos (Both) Nogales." Readers will meet Yolanda Sánchez, a single mother who came to work in the factories; Jimmy Teyechea, a cancer victim who became an outspoken environmental activist; Dario Miranda Valenzuela, an undocumented immigrant who was shot and killed by a U.S. Border Patrol agent; Cristina, a "tunnel kid" who aspired to flee the gang lifestyle; and Hope Torres and Tom Higgins, maquiladora managers who have made unique contributions to the community.

In sharing these stories of people transformed by love and faith, by pain and loss, Davidson relates their experiences to larger issues and shows that, although life on the border is tough, it is not without hope. Lives on the Line is an impassioned look at the changes that have swept the U.S.-Mexico border: the rising tension concerning free trade and militarization, the growing disparity between the affluent and the impoverished. At the same time, the book highlights the positive aspects of change, revealing challenges and opportunities not only for the people who live on the border but for all Americans.

Miriam Davidson is a freelance journalist and writer whose credits include the New York Times, Christian Science Monitor, The Nation, and The Progressive.

"Davidson's journalistic eye captures the legacy of squalor and misery that greed and irresponsibility have created along the borderlands. There is nothing new in this, but the stories Davidson tells form a textbook on just how closely woven even and good, banality and heroism can be. . . . Ambos Nogales has something to teach all of us, and Davidson shares these lessons well." —National Catholic Reporter

"She offers hope for progress in the troubled region with her detailed reports on charitable church projects and progressive corporate policies that are helping to alleviate suffering and reduce antagonism. Timely and compelling." —Booklist

"Her book examines the impact of the maquiladoras on two towns on either side of the border . . . and condemns industry and the Mexican government for forgetting workers in the pursuit of profits. . . . But in the end, the stories that stand out the most are her vivid portraits of those who have been left behind by economic progress." —New York Times Book Review

"This book by American journalist Davidson is a vivid portrait of what is happening in the twin border towns of Nogales in Arizona and Sonora, Mexico-the US's Berlin Wall. . . . This gripping book should be read by all ages and belongs in all libraries." —Choice

"A rare glimpse into the personal stories of life and death on the razor's edge in a contrary bordertown. . . . Her impassioned writing and acute investigative talents reveal the human faces often lost to the attention focused on increasing political rhetoric and now-commonplace headlines of tragedy." —Bloomsbury Review