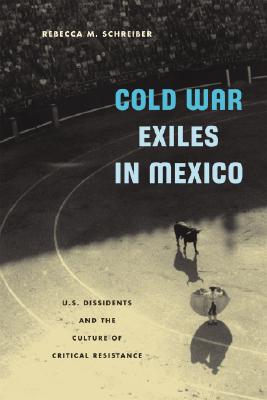 By Rebecca M. Schreiber
List Price: $25.50
Our Price: $22.50
(Save: $3.00 12%)
On Our Shelves Now
The onset of the Cold War in the 1940s and 1950s precipitated the exile of many U.S. writers, artists, and filmmakers to Mexico. Rebecca M. Schreiber illuminates the work of these cultural exiles in Mexico City and Cuernavaca and reveals how their artistic collaborations formed a vital and effective culture of resistance.

As Schreiber recounts, the first exiles to arrive in Mexico after World War II were visual artists, many of them African-American, including Elizabeth Catlett, Charles White, and John Wilson. Individuals who were blacklisted from the Hollywood film industry, such as Dalton Trumbo and Hugo Butler, followed these artists, as did writers, including Willard Motley. Schreiber examines the artists’ work with the printmaking collective Taller de Gráfica Popular and the screenwriters’ collaborations with filmmakers such as Luis Buñuel, as well as the influence of the U.S. exiles on artistic and political movements.

The Cold War culture of political exile challenged American exceptionalist ideology and, as Schreiber reveals, demonstrated the resilience of oppositional art, literature, and film in response to state repression.