END_OF_DOCUMENT_TOKEN_TO_BE_REPLACED

Mothers without Citizenship: Asian Immigrant Families and the Consequences of Welfare Reform (Paperback) 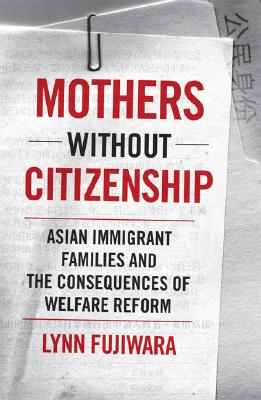 In August 1996 President Bill Clinton signed the Personal Responsibility and Work Opportunity Reconciliation Act that fulfilled his campaign promise to “end welfare as we know it,” and one month later the Illegal Immigration Reform and Immigrant Responsibility Act passed, deepening restrictions on immigrant and welfare provisions. These acts harshly and disproportionately affected Asian immigrants who continue to experience the legacy of this legislation today.

Lynn Fujiwara reveals a neglected aspect of the Asian immigrant story: the ill effects of welfare reform on Asian immigrant women and families. Mothers without Citizenship intertwines the issues of social and legal citizenship, arguing that these draconian measures redefined immigrants as outsiders whose lack of citizenship was used to deem them ineligible for public benefits. Fujiwara shows how these people are both a vulnerable, invisible group and active agents of change.

At once astute policy analysis and insightful research, Mothers without Citizenship is a significant contribution to this country’s immigration controversy, offering much-needed nuance to the discussion of the consequences of social policy on Asian immigrant communities and complicating debates solely focused around the politics of the border.

Lynn Fujiwara is assistant professor in the Program of Women’s and Gender Studies and the Department of Sociology at the University of Oregon.