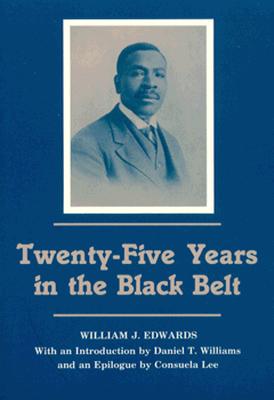 
On Our Shelves Now
Born in Snow Hill, in 1869, William J. Edwards graduated in 1893 from Tuskegee Institute, then under the direction of Booker T. Washington, and set out to find a way to use in his own life the values he had learned at Tuskeegee. He did not have to look far. Edwards toured Wilcox, Monroe, Butler, and Dallas counties and found a large black population in need of both liberal and practical education. Following the model set by Tuskegee, Edwards founded Snow Hill Institute in 1893 and was its principal and guiding hand for 31 years.

Twenty-Five Years in the Black Belt is a memoir written by Edwards in 1918, when the school was 25 years old. It not only provided a fascinating portrait of the conditions of black people and the state of race relations in Alabama at the time, but also tells of one person's determination to uplift his race, particularly through eductation, in the years following Reconstruction.
William J. Edwards (1869-1950) was the founder of Snow Hill Institute and served as its principal from 1893 until 1924. Snow Hill closed in 1973. Daniel T. Williams (introduction) served as archivist at Tuskegee University. Consuela Lee (epilogue), granddaughter of William J. Edwards, was founder and president of Springtree/Snow Hill Institute for the Performing Arts.

"Twenty-Five Years in the Black Belt is the memoir of the founder and principal of Snow Hill Institute, a 'little Tuskegee,' located in rural Wilcox County, Alabama. . . . Edwards reveals the conditions of blacks and race relations in Alabama between 1890 and 1917 and tells of his determination to uplift his race through education in the years following Reconstruction."
—Florida Historical Quarterly

"This addition to the Library of Alabama Classics has much to recommend it to historians, scholars, and anyone interested in the early history of the African-Americans' struggle to become educated, to be able to take an equal place in the land they now had to call home. Though the story is told by one man and revolves around his stubborn dedication to building a school where young people could receive an education, it also reveals much about the social and cultural life of those times."
—American Library Book Review

"One of the only testaments of a black person of that time and in that area. This book sheds considerable light on the conditions of blacks generally (especially tenant farmers), race relations, and the economic, social, educational, and political circumstances of black Alabamians. Edwards clearly illustrates the degree of oppression in the Alabama."
—Joe M. Richardson, Florida State University