Marriage by Force?: Contestation over Consent and Coercion in Africa (Paperback) 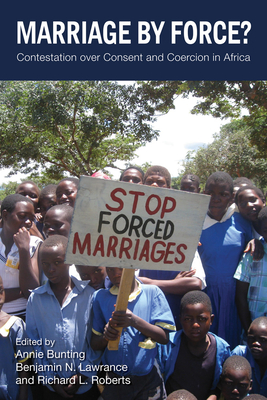 Marriage by Force?: Contestation over Consent and Coercion in Africa (Paperback)

With forced marriage, as with so many human rights issues, the sensationalized hides the mundane, and oversimplified popular discourses miss the range of experiences. In sub-Saharan Africa, the relationship between coercion and consent in marriage is a complex one that has changed over time and place, rendering impossible any single interpretation or explanation.

The legal experts, anthropologists, historians, and development workers contributing to Marriage by Force? focus on the role that marriage plays in the mobilization of labor, the accumulation of wealth, and domination versus dependency. They also address the crucial slippage between marriages and other forms of gendered violence, bondage, slavery, and servile status.

Only by examining variations in practices from a multitude of perspectives can we properly contextualize the problem and its consequences. And while early and forced marriages have been on the human rights agenda for decades, there is today an unprecedented level of international attention to the issue, thus making the coherent, multifaceted approach of Marriage by Force? even more necessary.

Annie Bunting is an associate professor in the Law and Society program at York University in Toronto. Her forthcoming book is The Invention of Contemporary Slavery, edited with Joel Quirk.

Benjamin N. Lawrance is an author and editor of eleven books, and editor in chief of the African Studies Review. He is professor of History at the University of Arizona.

Richard L. Roberts directs the Center for African Studies at Stanford University. His books include Trafficking in Slavery’s Wake: The Experience of Women and Children in Africa, edited with Benjamin N. Lawrance.

“This fascinating collection addresses the important problem of determining what forced marriage is through the perspective of historical studies of marriage from precolonial through postcolonial eras in Africa. The essays destabilize any idea that there is a simple dichotomy between forced and consensual marriage, and show that calling forms of coerced marriage customary or traditional ignores the extent to which tradition is constantly subject to change.”—Sally Engle Merry, Silver Professor of Anthropology, New York University, and author of Gender Violence: A Cultural Perspective

“Marriage by Force? pulls back the curtain and reveals the layers of social structures, gender, resistance, and liberation which manifest themselves when marriage is forced. The volume asks pertinent questions about a continuum of coercion in war and peace. Ultimately, the contributors have provided new perspectives on marriage, where contestations exist, with regard to not only the patriarchies of control of sexuality, the body and behavior, but also over labor, belonging and longing.”—Jean Allain, Queen’s University Belfast and the University of Pretoria

“This eloquent volume tackles age-old yet pressing problems of coercion, gender, and marriage in present-day Africa. The authors offer compelling case studies to demonstrate the deep-seated and complex values that underpin the subordination of women and girls and highlight the vulnerability of the female gender in the face of a growing movement—in Africa and abroad—to address the problem. This volume is a must-read for all those who teach, think, write, and formulate laws and public policy about gender and violence.”—Makau Mutua, World Bank and SUNY Buffalo Law School

“...This volume, dealing with one of the ‘more critical human rights challenges in the twenty-first century sub-Saharan Africa’, is a timely and useful contribution to a broader literature which seeks to place gender-based violence into historical, social, and cultural context. It ought to be essential reading for scholars and practitioners engaging in work to analyse and intervene in gender-based violence on the African continent and elsewhere.”—Rhian Keyse, Africa at LSE