The Other Side of Silence: Voices from the Partition of India (Paperback) 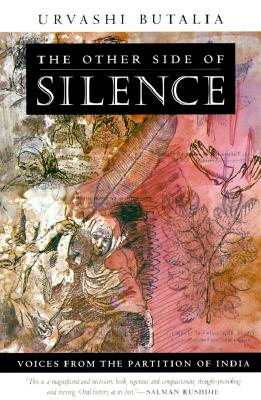 The Other Side of Silence: Voices from the Partition of India (Paperback)


On Our Shelves Now
The partition of India into two countries, India and Pakistan, caused one of the most massive human convulsions in history. Within the space of two months in 1947 more than twelve million people were displaced. A million died. More than seventy-five thousand women were abducted and raped. Countless children disappeared. Homes, villages, communities, families, and relationships were destroyed. Yet, more than half a century later, little is known of the human dimensions of this event. In The Other Side of Silence, Urvashi Butalia fills this gap by placing people-their individual experiences, their private pain-at the center of this epochal event.
Through interviews conducted over a ten-year period and an examination of diaries, letters, memoirs, and parliamentary documents, Butalia asks how people on the margins of history-children, women, ordinary people, the lower castes, the untouchables-have been affected by this upheaval. To understand how and why certain events become shrouded in silence, she traces facets of her own poignant and partition-scarred family history before investigating the stories of other people and their experiences of the effects of this violent disruption. Those whom she interviews reveal that, at least in private, the voices of partition have not been stilled and the bitterness remains. Throughout, Butalia reflects on difficult questions: what did community, caste, and gender have to do with the violence that accompanied partition? What was partition meant to achieve and what did it actually achieve? How, through unspeakable horrors, did the survivors go on? Believing that only by remembering and telling their stories can those affected begin the process of healing and forgetting, Butalia presents a sensitive and moving account of her quest to hear the painful truth behind the silence.
Urvashi Butalia is Director and Cofounder of Kali for Women, India's first feminist publishing house. An active participant in India's women's movement for more than two decades, she holds the position of Reader at the College of Vocational Studies at the University of Delhi.