Meeting the Universe Halfway: Quantum Physics and the Entanglement of Matter and Meaning (Paperback) 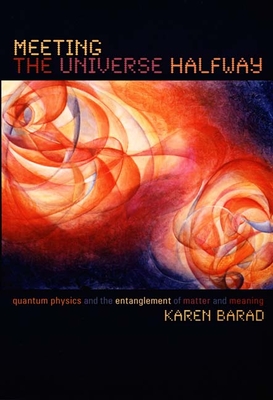 Meeting the Universe Halfway: Quantum Physics and the Entanglement of Matter and Meaning (Paperback)


On Our Shelves Now
Meeting the Universe Halfway is an ambitious book with far-reaching implications for numerous fields in the natural sciences, social sciences, and humanities. In this volume, Karen Barad, theoretical physicist and feminist theorist, elaborates her theory of agential realism. Offering an account of the world as a whole rather than as composed of separate natural and social realms, agential realism is at once a new epistemology, ontology, and ethics. The starting point for Barad's analysis is the philosophical framework of quantum physicist Niels Bohr. Barad extends and partially revises Bohr's philosophical views in light of current scholarship in physics, science studies, and the philosophy of science as well as feminist, poststructuralist, and other critical social theories. In the process, she significantly reworks understandings of space, time, matter, causality, agency, subjectivity, and objectivity.

In an agential realist account, the world is made of entanglements of "social" and "natural" agencies, where the distinction between the two emerges out of specific intra-actions. Intra-activity is an inexhaustible dynamism that configures and reconfigures relations of space-time-matter. In explaining intra-activity, Barad reveals questions about how nature and culture interact and change over time to be fundamentally misguided. And she reframes understanding of the nature of scientific and political practices and their "interrelationship." Thus she pays particular attention to the responsible practice of science, and she emphasizes changes in the understanding of political practices, critically reworking Judith Butler's influential theory of performativity. Finally, Barad uses agential realism to produce a new interpretation of quantum physics, demonstrating that agential realism is more than a means of reflecting on science; it can be used to actually do science.

Karen Barad is Professor of Feminist Studies, Philosophy, and History of Consciousness at the University of California, Santa Cruz. She has a doctorate in theoretical particle physics.