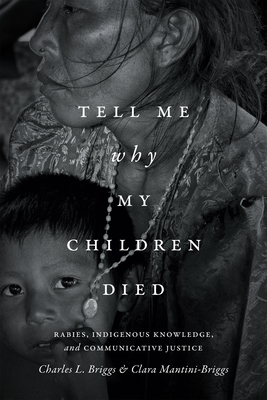 By Charles L. Briggs
List Price: $28.95
Our Price: $25.95
(Save: $3.00 10%)
On Our Shelves Now
Tell Me Why My Children Died tells the gripping story of indigenous leaders' efforts to identify a strange disease that killed thirty-two children and six young adults in a Venezuelan rain forest between 2007 and 2008. In this pathbreaking book, Charles L. Briggs and Clara Mantini-Briggs relay the nightmarish and difficult experiences of doctors, patients, parents, local leaders, healers, and epidemiologists; detail how journalists first created a smoke screen, then projected the epidemic worldwide; discuss the Ch vez government's hesitant and sometimes ambivalent reactions; and narrate the eventual diagnosis of bat-transmitted rabies. The book provides a new framework for analyzing how the uneven distribution of rights to produce and circulate knowledge about health are wedded at the hip with health inequities. By recounting residents' quest to learn why their children died and documenting their creative approaches to democratizing health, the authors open up new ways to address some of global health's most intractable problems.
Charles L. Briggs is Alan Dundes Distinguished Professor in the Department of Anthropology, University of California, Berkeley, and the author or coauthor of ten books. Clara Mantini-Briggs, a Venezuelan public health physician, was the National Coordinator of the Dengue Fever Program in Venezuela's Ministry of Health and is a Lecturer in the Department of Anthropology at the University of California, Berkeley. They are coauthors of Stories in the Time of Cholera: Racial Profiling during a Medical Nightmare.