Nation Within: The History of the American Occupation of Hawai'i (Paperback) 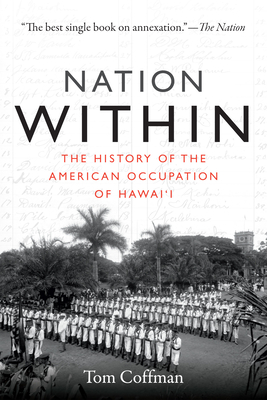 Nation Within: The History of the American Occupation of Hawai'i (Paperback)


On Our Shelves Now
In 1893 a small group of white planters and missionary descendants backed by the United States overthrew the Kingdom of Hawai'i and established a government modeled on the Jim Crow South. In Nation Within Tom Coffman tells the complex history of the unsuccessful efforts of deposed Hawaiian queen Lili'uokalani and her subjects to resist annexation, which eventually came in 1898. Coffman describes native Hawaiian political activism, the queen's visits to Washington, D.C., to lobby for independence, and her imprisonment, along with hundreds of others, after their aborted armed insurrection. Exposing the myths that fueled the narrative that native Hawaiians willingly relinquished their nation, Coffman shows how Americans such as Theodore Roosevelt conspired to extinguish Hawai'i's sovereignty in the service of expanding the United States' growing empire.
Tom Coffman is an award-winning independent writer and filmmaker. He is the author of several books including The Island Edge of America: A Political History of Hawai'i, and the producer of many documentaries including O Hawai'i: From Settlement to Kingdom and Nation Within.