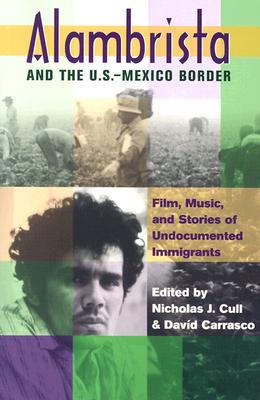 Robert M. Young's critically acclaimed 110-minute film Alambrista (1977) depicts the harsh realities of Mexican life on both sides of the border. Following the birth of his first child, a young Mexican slips across the border into the United States in search of the American dream for himself and his family. He finds heartbreak, exploitation, and disappointment, but also friendship, affection, and help along the way.

When first released, Alambrista received critical praise and a number of awards, including a Camera d'Or at the Cannes Film Festival. For the University of New Mexico Press release, a distinguished group of scholars has packaged a new director's cut of the film with a book of essays devoted to immigration and the U.S.-Mexican borderlands. These scholars include Albert Camarillo, Richard Griswold del Castillo, Daniel Groody, Teresa Carrillo, Howie Movshovitz, Bill Ong Hing, Jos Cuellar, Cordelia Candelaria, and the editors.

The director's cut includes new scenes, an improved sound track with a totally new musical score by Dr. Loco and Los Tiburones del Norte, English subtitles, and interviews with the director and other participants. Also included with the book and DVD is an enhanced CD of the sound track.