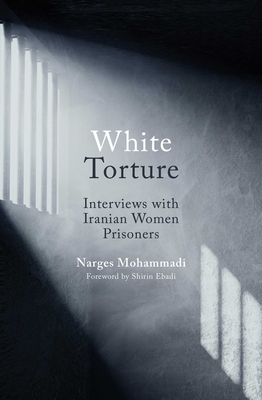 With a foreword by Shirin Ebadi, Nobel Peace Prize winner

'A must-read for anyone concerned with human rights in Iran. A gripping, moving and utterly shocking account.' Kylie Moore-Gilbert

Extended solitary confinement has been condemned as a severe violation of human rights. Yet it is still widely used in Iranian prisons. In White Torture, thirteen women, including Nazanin Zaghari-Ratcliffe, share their experiences of imprisonment: harassment and beatings by guards, total blindfolding and denial of medical treatment. Angry interrogators threaten their families and lie about their whereabouts. One prisoner is even told she is dead.

None of the women have committed crimes – they are prisoners of conscience or held hostage as bargaining chips. Through psychological torture, the Iranian state hopes to remake their souls. These interviews, carried out while each woman was in prison or facing charges, are astounding documents of resistance and integrity. White Torture unveils the rot at the heart of the Iranian legal system and calls on us to act for change.
Narges Mohammadi is Vice President of the Defenders of Human Rights Center. A professional engineer, she lost her post in 2009, following a jail sentence. As a journalist, she wrote many articles arguing for social reforms in Iran and published an essay collection, The Reforms, the Strategy, and the Tactics. She campaigns for the abolition of the death penalty, women’s rights and the right to protest. She has spent over eight years in Iranian prisons and has been incarcerated since November 2021 – the same year she was nominated for the Nobel Peace Prize. Her work has been praised by Amnesty International, Reporters Without Borders, and PEN. Her documentary White Torture won an award for reportage at the International Film Festival and Human Rights’ Forum. Her family now lives in France.
'The testimonies of 14 women collected in White Torture read like a charge sheet against the Islamic Republic. Fortunately for future prosecutors, this book is full of inquisitors’ names. Should the ayatollahs and their bully-boys fall, it will surely form part of the case against them. And, as it did for Mr Khamenei, the torment of Iran’s prisons might yet propel their inmates to power.'
— Economist

'Narges still roars like a lioness. This is why the regime wants to crush her. White Torture is another roar of this lioness.'
— Shirin Ebadi

'The testimonies of these brave women are made more effective for being delivered in Amir Rezanezhad’s calm, understated translation. They reveal an awe-inspiring capacity for resilience and resistance… Their courage is beyond imagination.'
— Irish Times

'The women interviewed in this book narrate their experiences of solitary confinement in the Islamic Republic’s jails, revealing the extent of the regime’s unimaginable brutality and Iranian people’s immense suffering under its rule.

But as unspeakably brutal as this regime is, its violence reveals another truth: its helplessness and defeat in the face of women like these, and the courageous resistance of so many Iranians who like these women risk so much, including their lives, but refuse to succumb to the regime. This is where hope lies, in their resilience, in their power to stand up to the totalitarian regime, in their determination to preserve their sense of dignity and individual identity. This is what makes the regime so incompetent and its violence so ineffectual.

These women reveal the truth about the Islamic republic and they pay the price for it. Through reading their testimonials we too learn the truth. The question every reader should ask herself is, now that we know the truth, what are we going to do about it?'
— Azar Nafisi, author of Reading Lolita in Tehran

'White Torture is a must-read for anyone concerned with human rights in Iran. A gripping, moving and utterly shocking account of the horrific abuse suffered by female political prisoners at the hands of the Iranian regime, Narges Mohammadi's interviews with her fellow detainees provide an invaluable window into the capricious and cruel world of Iran's prison system.'
— Kylie Moore-Gilbert, author of The Uncaged Sky

'Small details shine out, speaking of strength of will and a refusal to be broken…heartrending.’
— New Internationalist