A Little Matter of Genocide: Holocaust and Denial in the Americas 1492 to the Present (Paperback) 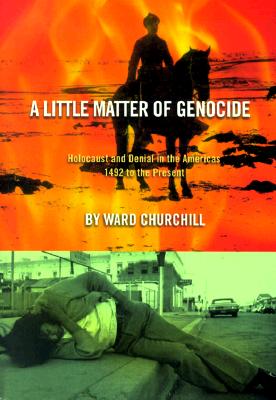 A Little Matter of Genocide: Holocaust and Denial in the Americas 1492 to the Present (Paperback)

Ward Churchill has achieved an unparalleled reputation as a scholar-activist and analyst of indigenous issues in North America. Here, he explores the history of holocaust and denial in this hemisphere, beginning with the arrival of Columbus and continuing on into the present.

He frames the matter by examining both revisionist denial of the Nazi-perpatrated Holocaust and the opposing claim of its exclusive uniqueness, using the full scope of what happened in Europe as a backdrop against which to demonstrate that genocide is precisely what has been--and still is--carried out against the American Indians.

Churchill lays bare the means by which many of these realities have remained hidden, how public understanding of this most monstrous of crimes has been subverted not only by its perpetrators and their beneficiaries but by the institutions and individuals who perceive advantages in the confusion. In particular, he outlines the reasons underlying the United States's 40-year refusal to ratify the Genocide Convention, as well as the implications of the attempt to exempt itself from compliance when it finally offered its endorsement.

In conclusion, Churchill proposes a more adequate and coherent definition of the crime as a basis for identifying, punishing and preventing genocidal practices, wherever and whenever they occur.

Ward Churchill has achieved an unparalleled reputation as a scholar-activist and analyst of indigenous issues. He is a Professor of American Indian Studies at the University of Colorado, Boulder, a leading member of AIM, and the author of numerous books, including A Little Matter of Genocide, Struggle for the Land and Fantasies of the Master Race.