Kill the Indian, Save the Man: The Genocidal Impact of American Indian Residential Schools (Paperback) 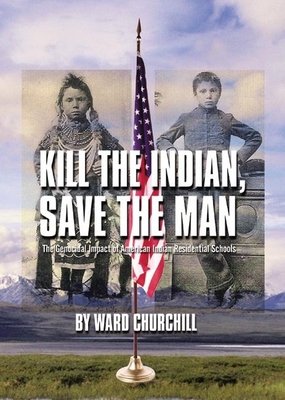 Kill the Indian, Save the Man: The Genocidal Impact of American Indian Residential Schools (Paperback)

For five consecutive generations, from roughly 1880 to 1980, Native American children in the United States and Canada were forcibly taken from their families and relocated to residential schools.

The stated goal of this government program was to kill the Indian to save the man. Half of the children did not survive the experience, and those who did were left permanently scarred. The resulting alcoholism, suicide and the transmission of trauma to their own children has led to a social disintegration with results that can only be described as genocidal.

The Indian residential schools in both the US and Canada . . . include d] the forced exile of children and the prohibition of the use of a national language or religion . . . Churchill presents a bleak yet utterly necessary history of a brutal system that was in effect until 1990.--Booklist

Painful and powerful, Kill the Indian, Save the Man provides the first comprehensive study of the effects of the residential schools into which American Indian children were forced by the U.S. and Canadian governments. With his usual painstaking accuracy and moving prose, Churchill exposes the genocidal nature of this important dimension of the assimilationist policies that continue to decimate Native North American communities. This book is essential reading for anyone concerned with the ravages of settler state colonialism or the effects of transgenerational trauma.--Natsu Taylor Saito, Professor of Law, Georgia State University, and author of We Have Met the Enemy, American Exceptionalism and Subversion of the Rule of Law

The analysis and evidence deployed herein are both compelling and altogether consistent with what I've discovered in my own research and experience as a judge on a special tribunal assessing the effects of residential schooling on the Aboriginal peoples of Canada. I urge all people who oppose genocide--from whatever source, against whatever victims--to read this book.--Jim Craven (Omahkohkiaayo-i'poyi), citizen of the Blackfoot Nation and Professor of Economics, Clark College

Ward Churchill is the author of A Little Matter of Genocide, among other books. He is currently a Professor of American Indian Studies at the University of Colorado, Boulder.

Ward Churchill has achieved an unparalleled reputation as a scholar-activist and analyst of indigenous issues. He is a Professor of American Indian Studies at the University of Colorado, Boulder, a leading member of AIM and the author of numerous books, including A Little Matter of Genocide, Struggle for the Land and Fantasies of the Master Race.