END_OF_DOCUMENT_TOKEN_TO_BE_REPLACED

The Tunnels of Cu Chi: A Harrowing Account of America's Tunnel Rats in the Underground Battlefields of Vietnam (Mass Market) 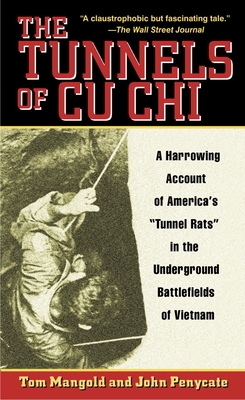 At the height of the Vietnam conflict, a complex system of secret underground tunnels sprawled from Cu Chi Province to the edge of Saigon. In these burrows, the Viet Cong cached their weapons, tended their wounded, and prepared to strike. They had only one enemy: U.S. soldiers small and wiry enough to maneuver through the guerrillas’ narrow domain.

The brave souls who descended into these hellholes were known as “tunnel rats.” Armed with only pistols and K-bar knives, these men inched their way through the steamy darkness where any number of horrors could be awaiting them–bullets, booby traps, a tossed grenade. Using firsthand accounts from men and women on both sides who fought and killed in these underground battles, authors Tom Mangold and John Penycate provide a gripping inside look at this fearsome combat. The Tunnels of Cu Chi is a war classic of unbearable tension and unforgettable heroes.

Praise for The Tunnels of Cu Chi

“Chilling . . . what war really was and how it was fought.”—The New York Times

Tom Mangold has been an investigative reporter with BBC TV and a reporter for the Sunday Mirror and the Daily Express. As a war correspondent, he covered Vietnam, two Middle East wars, and the Russian invasion of Afghanistan. His first book, The File on the Tsar, was an international bestseller.

John Penycate is a journalist who has reported regularly for BBC TV’s weekly public affairs shows The Money Programme and Panorama and has interviewed major political and business leaders. He lectures at the journalism schools of London and Westminster universities. A resident of London, Penycate is active in institutes and societies concerned with the media and public affairs.

“Chilling . . . what war really was and how it was fought.”—The New York Times