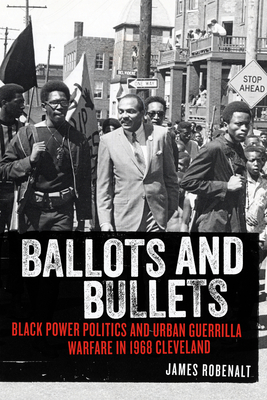 
On Our Shelves Now
On July 23, 1968, police in Cleveland battled with black nationalists.The dramatic shootout in the Glenville neighborhood left ten dead and over fifteen wounded. The event sparked days of heavy rioting and raised myriad questions. Were these shootings an ambush by the nationalists? Or were the nationalists defending themselves from an imminent police assault? Mystery still surrounds how the urban warfare started and the role the FBI might have played in its origin.
Cleveland's story intersected with with some of the most important African American figures of the time. Dr. Martin Luther King and Malcolm X both came to Cleveland, shaping the debate over how to address systemic racism. Should it be with nonviolence or armed self-defense? Malcolm X first delivered his iconic "The Ballot or the Bullet" speech in Cleveland. Three years later, in 1967, Carl Stokes, with King's help, became the first black mayor of a major US city. The ballot seemed to have triumphed over the bullet—and then Dr. King was assassinated. In the spring of 1968, while Mayor Stokes kept peace in Cleveland and Bobby Kennedy came to deliver his "Mindless Menace of Violence" speech, nationalists used an antipoverty program Stokes created in King's honor to buy rifles and ammunition.
Ballots and Bullets examines the revolutionary calls for addressing racism through guerrilla warfare in America's streets. It also puts into perspective the political aftermath, as racial violence and rebellions in most American cities led to white backlash and provided lift to the counterrevolution that brought Richard Nixon to power, effectively marking an end to President Johnson's "War on Poverty."
Fifty years later, many politicians still call for "law and order" to combat urban unrest. The Black Lives Matter movement and continued instances of police misconduct and brutality show that the cycle of race-based violence continues. The root causes—racism and poverty—remain largely unaddressed.

James Robenalt is a trial lawyer and the author of January 1973, The Harding Affair, and Linking Rings. He lives in Cleveland, Ohio.
"A beautiful and moving portrait of a city that explains so much about our racial politics, then and now. Robenalt weaves together the stories of famous and not-so-famous black political leaders to show the consequences of racism and the ways that various leaders have tried to address it. An important topic that everyone would benefit from learning more about." —Michael Smerconish, CNN host and SiriusXM radio journalist


“Jim Robenalt brings new perspective to difficult history with a fresh approach....Ballots and Bullets takes on the complicated story of race and the police, but expertly places it in the larger historical context that includes Dr. King, Malcolm X, and Robert Kennedy. [Robenalt] is a rising, original historian.  —Rick Ungar and Michael Steele, Steele and Ungar, Sirius XM’s POTUS Channel


“My father blazed a trail in the black power movement by becoming the first African American mayor of a major US city in 1967. This book dramatically chronicles his rise and the intersection of his journey with Dr. King and others in the civil rights movement.” —Cordell Stokes, Chairman and CEO CLC Stokes Consulting Group, and son of former Mayor Carl B. Stokes (1968–1971)


“Jim Robenalt tells a vivid if painful story of Cleveland’s place in the history of the struggle for civil rights—a struggle that continues today.  Reading this history reminds us of the work ahead.”—Jane Campbell, former Cleveland mayor (2002–2006)


“The history of our nation is a history of racial injustice and the fight to rectify it. In compelling prose, Jim Robenalt’s Ballots and Bullets does the vital work of shedding light on a pivotal moment in our nation’s history, when justice, civil rights, and the unfulfilled promise of America hung in the balance. His intense focus on Cleveland—the first major US city to elect an African American leader to the Mayor’s office—reminds us how quintessentially American Cleveland’s story truly is.”—Dan Moulthrop, CEO, The City Club of Cleveland.


“James Robenalt has taken on a challenging review of the interaction in Cleveland between Carl Stokes and Martin Luther King, Jr....The book is well written, well researched and accurate.  Any reader will be touched both in mind and heart.”—Joan Brown Campbell, General Secretary, National Council of Churches and Director of Religion, Chautauqua Institution


​“This important book recalls some agonizing history but it is a history we must not forget. With the passage of fifty years, one can ask, as Robenalt does, why has there been so little progress in race relations?” —Walter Beach, former Cleveland Browns champion and assistant to Mayor Carl B. Stokes (1967-1968)

"The moment-by-moment description of the firefight between police and black nationalists is chilling. Readers will find much to contemplate in this balanced report." —Publishers Weekly