WHAT HUMANITY NEEDS Revolution, and the New Synthesis of Communism (Paperback) 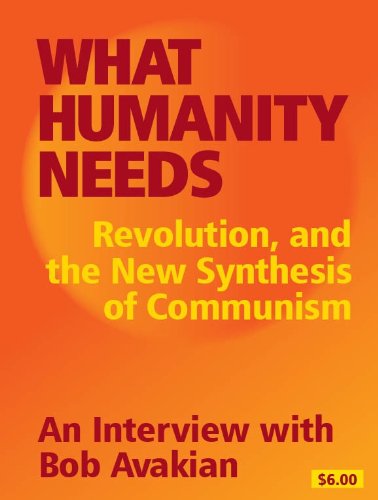 WHAT HUMANITY NEEDS Revolution, and the New Synthesis of Communism (Paperback)


On Our Shelves Now
At the beginning of 2012, an in-depth interview with Bob Avakian, Chairman of the Revolutionary Communist Party, USA, was conducted over a period of several days by A. Brooks, a younger-generation revolutionary who has been inspired by the leadership and body of work of Bob Avakian and the new synthesis of communism this has brought forward. Brooks is the author of "God The Original Fascist" (a series of articles which appeared in Revolution in 2005, and is available at revcom.us). From the outset and through the course of this interview, Brooks posed probing questions, dealing with a wide range of subjects, including: the challenges of building a movement for revolution in a powerful imperialist country like the U.S., and initiating a new stage of communist revolution in a world marked by profound inequalities and antagonisms, and repeated upheavals, but also the weakness of communist forces at this time; the content of the new synthesis of communism, its vision of a radically different and emancipating society and world, and how this applies to many different spheres of society and social life, such as art and culture and intellectual inquiry and ferment; previous historical experience of the revolutionary and communist movements; and the personal experience, as well as broader social experience, which led Avakian to become a communist and contributed to his development as a communist leader. The fact that Avakian did not know in advance what the questions would be, and that many of them came up through the course of the interview itself, adds to the liveliness of the interview and the living sense of the method with which Avakian digs into, examines from many angles, and "breaks down" the kinds of far-reaching and often complex questions which were posed in this interview and which have to be grappled with in confronting the challenges of radically transforming the world through communist revolution. This is the text of the interview