From Ike to Mao and Beyond: My Journey from Mainstream America to Revolutionary Communist (Paperback) 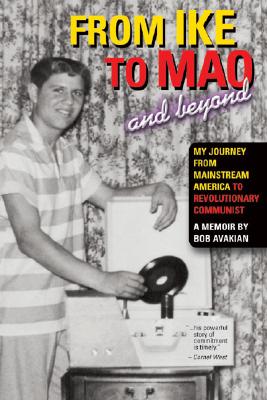 From Ike to Mao and Beyond: My Journey from Mainstream America to Revolutionary Communist (Paperback)


On Our Shelves Now
Spanning some of the most tumultuous and storied decades of American history, this account of one man's political life touches on what it takes to lead a revolution and how such a leader is made. Bob Avakian, radical activist and communist leader, takes readers into his 1950s, middle-class past with tales of attending an integrated high school, an experience that profoundly altered his worldview. From there, he traces his path into the heady whirl of 1960s Berkeley, where he engaged with revolutionaries of all stripes. Revealing insights gained from politics, music, sports, study, and late-night bull-sessions, this dissection of the experiences that formed and informed Avakian looks back at a galvanizing history, and forward to a possible future of revolutionary change. His story offers a rare picture of what it is like to lead a revolutionary party in the most powerful country in the world.

The above is excerpted from Bob Avakian (BA)–Official Biography, a publication of The Bob Avakian Institute.
"[These] memories are sharp and clear...compelling as maps for those who demand a better world."  —Dr. Juan Gomez-Quinones, author, Mexican American Labor, 1790-1990

"Information about the Black Power struggle and black nationalist organizations that is available nowhere else."  —Elemental Magazine


"A learning document that makes for a fascinating read."  —Counterpunch.org