THE NEW COMMUNISM: The science, the strategy, the leadership for an actual revolution, and a radically new society on the road to real emancipation (Paperback) 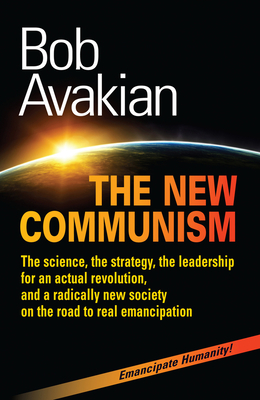 THE NEW COMMUNISM: The science, the strategy, the leadership for an actual revolution, and a radically new society on the road to real emancipation (Paperback)

For anyone who cares about the state of the world and the condition of humanity and agonizes over whether fundamental change is really possible, this landmark work provides a sweeping and comprehensive orientation, foundation, and guide to making the most radical of revolutions: a communist revolution aimed at emancipating humanity--getting beyond all forms of oppression and exploitation on a world scale.

The author, Bob Avakian, is the architect of a new synthesis of communism. This new synthesis is a continuation of, but also represents a qualitative leap beyond, and in some important ways a break with, communist theory as it had been previously developed. Avakian has written this book in such a way as to make even complex theory accessible to a broad audience. In this book, he draws on his decades of work advancing the science of communism and his experience as a revolutionary communist leader, including leading the Revolutionary Communist Party, USA, as its Chairman since its founding in 1975.

This is a path-breaking work, one that scientifically analyzes the system of capitalism-imperialism and its unresolvable contradictions;confronts the challenges facing the movement for revolution; and forges a way forward to making an actual revolution in this country, as part of contributing to communist revolution internationally
"If you don't have a poetic spirit – or at least a poetic side – it is very dangerous for you to lead a Marxist movement or be the leader of a socialist state. " — Bob Avakian

Bob Avakian (BA) is the architect of a whole new framework of human emancipation, the new synthesis of communism, which is popularly referred to as the "new communism. " The goal of the new communism is a total revolution – the most radical revolution in human history that aims at nothing less than overcoming all forms of oppression and exploitation all over the world, a society where humanity could truly flourish. The new synthesis is based on more than 40 years of revolutionary work that BA has done critically analyzing and drawing from past revolutionary experience and theory, and a broad range of human activity and thought. It is a continuation of, but also represents a qualitative leap beyond, and in some important ways a break with, communist theory as it had been previously developed. It provides the basis – the science, the strategy, and the leadership – for an actual revolution and a radically new society on the road to real emancipation.

Bob Avakian is the author of the Constitution for the New Socialist Republic in North America , an inspiring application of the new synthesis of communism. This Constitution, which was adopted by the Central Committee of the Revolutionary Communist Party, USA, in 2010, is a blueprint for the new socialist society, beginning with Day One of a protracted transitional period leading to a world without classes and class distinctions, a world without oppression and the destructive divisions and antagonisms between people.

Ardea Skybreak, a scientist with professional training in ecology and evolutionary biology, and a follower of Bob Avakian (BA), captures the essence of BA's revolutionary work and leadership over the last 40 years:

"The hallmark of Bob Avakian's work [has been] working on building a society that most human beings would want to live in. Bob Avakian has been spending his whole life, dec- ades and decades, developing work that is deepening our understanding of why these problems are not just accidental, or periodic anomalies – how they actually stem from, originate in, the deeper structures of the system, and why it's the system itself, the system of capitalism imperialism, that has to go, and be replaced with a completely different system, before we could really emancipate humanity."

Central to Bob Avakian's new synthesis of communism is its thorough and consistent scientific method and approach. "The new synthesis represents and embodies a qualitative resolution of a critical contradiction that has existed within communism in its development up to this point, between its fundamentally scientific method and approach, and aspects of communism which have run counter to this." [Six Resolutions of the Central Committee of the Revolutionary Communist Party, USA, January 1, 2016.]

This qualitative advance in the scientific approach to making revolution and emancipating humanity provides the foundation and point of departure for a new stage of communist revolution that is urgently needed in the world today. The scientific method and approach of the new synthesis is key to its theoretical breakthroughs which include: deepening the understanding of internationalism; developing new insights into the strategic approach to revolution, which reveal the actual possibility of making revolution, even in a country like the U.S.; and re-envisioning how to go forward in the struggle to create a radically new – and truly emancipatory – society.

Bob Avakian is the Chairman of the Revolutionary Communist Party, USA (RCP), which he has led since its formation in 1975. He emerged as a major political figure throughout the upheavals and rebellions of the period of the '6os: awakening to political life in the period of the emerging discontent and ferment among students in the Free Speech Movement in Berkeley; joining and then becoming a leader of the resistance and protests against the Vietnam War; becoming an early and prominent supporter of the Black Liberation struggle where he was closely associated with the Black Panther Party; then playing a critical leading role in the political and ideological struggles of the New Left Movement of the 1960s, which ultimately led to the founding of the RCP. In the decades since the 1960s BA has given decisive leadership to the theoretical as well as strategic and practical dimensions of the revolution, both in the U.S. and internationally.

As a revolutionary leader, he embodies a rare combination: someone who has been able to develop scientific theory on a world-class level, while at the same time having a deep understanding of and visceral connection with the most oppressed, and a highly developed ability to "break down" complex theory and make it broadly accessible.

The scope and content of BA's leadership is reflected in his extensive body of work which includes more than a hundred articles, books, films and audio recordings. BA's collected works are available through The Bob Avakian Institute, www.thebobavakianinstitute.org.

The above is excerpted from “Bob Avakian (BA)–Official Biography”, a publication of The Bob Avakian Institute.
“I love it when he talks about my people being all people . . .  My people across the board—I don’t care who they are . . . he always puts the struggle against white supremacy at the center . . . Second, the centrality of the issue of gender, the vicious forms of patriarchy inseparable from that white supremacy. Third, empire—invasions, dominations . . . And the fourth, the planet—not just global warming. It’s ecological catastrophe that is impinging every day primarily owing to corporate greed and the elites who are in the driver’s seat of a capitalist civilization that cuts across national boundaries—that’s what you find in this text. And last but not least, the concern about our precious immigrant brothers and sisters and the vicious scapegoating that’s going on, the deportations under neo-liberal presidents, no matter what color they are. The attempt to [not] lose sight of their humanity. How do you bring these together in such a way that you have a united front? And that’s in part what he’s calling for, and I as a revolutionary Christian in the name of Jesus will be part of that united front, even given the disagreements that we might have. That’s why I like this text. That’s why it’s important.” — Dr. Cornel West speaking about The New Communism at the book launch

"With america in the midst of a profound sickness evidenced by the continuing slaughter of black people by police recently—it is necessary that a literature be in existence that challenges our assumptions . . . However we eventually get out of this mess it will take a profusion of ideas by fearless thinkers—and Bob Avakian is that . . . He never lost the faith." — Matthew Shipp, musician and composer

"Bob Avakian has made trenchant observations and brought insightful analyses to a host of problems confronting contemporary society. He is genuinely concerned about the plight of the masses and has given much critical thought regarding proposed solutions for their uplift."  — Norm R. Allen, Jr., author, Black Humanist Experience

"In this book, Avakian honestly and perceptively handles a number of questions about the difficulties of bringing about a total change in an oppressive system. It is a valuable addition to his corpus of work; a splendid exegesis of revolutionary potential."  — Herb Boyd, author, The Harlem Reader

"Bob Avakian presents a new vision for America. The New Communism meticulously outlines the revolutionary changes that America needs. And, as the subtitle suggests, the book is packed with promise and the detail to back it up." — Melissa Wuske, Foreword Reviews