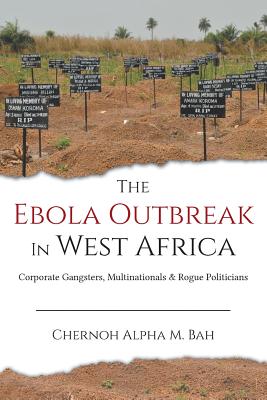 In The Ebola Outbreak in West Africa, the award-wining Sierra Leonean journalist, political activist and human rights advocate Chernoh Alpha M. Bah presents an in-depth investigation that challenges the official narrative surrounding the origin and widespread transmission of the 2014 West African Ebola epidemic - one of the most catastrophic human tragedies in the twenty first century.

Bah demonstrates with hard evidence that the western narrative, which rashly pinned the origin of the epidemic on a two-year-old boy in a small Guinean village and implicated the backwardness of Africans as the cause for the widespread nature of the outbreak, was neither corroborated nor challenged by Western journalists and the Western academic establishment. He explores why, at the initial stages of the outbreak when thousands of men, women and children were dying, Western media had already settled upon a narrative that blamed and criminalized the victims for the epidemic's explosion.

In this groundbreaking text, Bah establishes the West African outbreak as the continuation of a colonial legacy of multinational corporate exploitation, political corruption, and western dehumanization of the African. Glaringly absent from the official narrative, he argues, is how the billions of dollars of foreign corporate investments existing in West Africa's natural resource exploitation and the strategic international military and governmental intelligence interests in the region (including billion-dollar animal-testing and deadly-pathogen laboratory projects) served as the foundations for the outbreak. It is only from within this global context that the conditions of the outbreak and its widespread devastation can be properly understood.

Bah's Ebola Outbreak in West Africa illustrates and illuminates the Ebola crises in new and terrifying ways. It is the first indigenous account that presents a holistic and independent investigation into one of the worst human tragedies in recent history.