A, B, C: Three Short Novels: The Jewels of Aptor, The Ballad of Beta-2, They Fly at Ciron (Paperback) 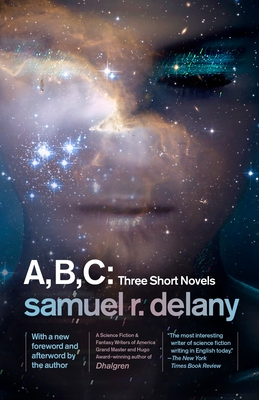 A, B, C: Three Short Novels: The Jewels of Aptor, The Ballad of Beta-2, They Fly at Ciron (Paperback)

The Jewels of Aptor is a science-fantasy story about a seafaring quest that sets out to find powerful magic jewels on a mystical, forbidden island where unimaginable danger lies.

The Ballad of Beta-2 is about a future academic searching for the true story behind an interstellar voyage, a journey over multiple generations that ended in tragedy.

They Fly at Çiron is a fantasy about the clash between a marauding army and a peaceful village at the foot of a mountain from which a race of winged people oversees both sides.

Presenting these three novels in this omnibus volume for the first time, along with a new foreword and afterword by the author, A, B, C showcases Delany’s masterful storytelling ability and deep devotion to his craft.
Samuel Delany’s stories are available in Aye, and Gomorrah and Other Stories (science fiction and fantasy) and Atlantic: Three Tales (experimental fiction). His works have won multiple Hugo and Nebula awards, and his novel Dark Reflections was a Stonewall Honor Book in 2008. He has been inducted into the Science Fiction Hall of Fame and received the Damon Knight Memorial Grand Master of Science Fiction Award. His novels include science fiction works such as Nova, Dhalgren, The Fall of the Towers, Babel-17, The Einstein Intersection; also the four-volume fantasy series Return to Nevèrÿon. He is the author of several other novels and works of nonfiction. He lives in New York City and has recently retired after 16 years of teaching creative writing at Temple University.
“The novels are all engaging reads with vivid, likable characters and satisfying plots. They entertain, confident in the power and pleasures of solid storytelling, while also unabashedly tackling various ideas, both troubling and idealistic, about society and culture with rigorous intelligence. Delany's preface and afterword are substantial and enjoyable; far from being mere treats for the committed fan, they are fascinating in their own rights and offer some of the most interesting writing in the book.”
—Kirkus Reviews

“SFWA Grand Master Delany’s collection of three early works is essential not just for the classics it contains but for the author’s riveting 40-page afterword (as well as his shorter but equally entertaining preface). . . .  All of the novels are excellent and must-reads for anyone interested in science fiction, and the additional autobiographical notes in the afterword add a wealth of material for Delany’s fans.”
—Publishers Weekly, starred review and PW Picks Book of the Week

“He is a world-maker, and in his work idea-spinning and storytelling are aspects of one another.”
—Reginald Shepherd, Poets & Writers

“In his novels, criticism, [and] letters, Samuel R. Delany left an indelible mark upon the last century, and there's little doubt he'll continue to do the same in the present one.”
—Elizabeth Hand, The Magazine of Fantasy and Science Fiction