Make Your Home Among Strangers: A Novel (Paperback) 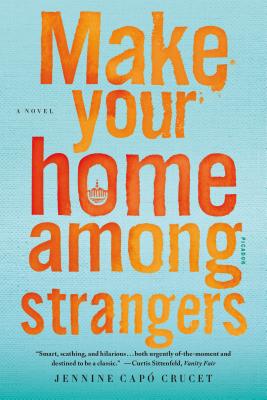 Make Your Home Among Strangers: A Novel (Paperback)

When Lizet-the daughter of Cuban immigrants and the first in her family to graduate from high school-secretly applies and is accepted to an ultra-elite college, her parents are furious at her decision to leave Miami. Just weeks before she's set to start school, her parents divorce and her father sells her childhood home, leaving Lizet, her mother, and Leidy-Lizet's older sister, a brand-new single mom-without a steady income and scrambling for a place to live.

Amidst this turmoil, Lizet begins her first semester at Rawlings College, distracted by both the exciting and difficult moments of freshman year. But the privileged world of the campus feels utterly foreign, as does her new awareness of herself as a minority. Struggling both socially and academically, she returns to Miami for a surprise Thanksgiving visit, only to be overshadowed by the arrival of Ariel Hernandez, a young boy whose mother died fleeing with him from Cuba on a raft. The ensuing immigration battle puts Miami in a glaring spotlight, captivating the nation and entangling Lizet's entire family, especially her mother.

Pulled between life at college and the needs of those she loves, Lizet is faced with difficult decisions that will change her life forever. Urgent and mordantly funny, Make Your Home Among Strangers tells the moving story of a young woman torn between generational, cultural, and political forces; it's the new story of what it means to be American today.

Jennine Capó Crucet is an author and contributing opinion writer for the New York Times. Her novel Make Your Home Among Strangers was a New York Times Editor’s Choice book, the winner of the 2016 International Latino Book Award, and was cited as a best book of the year by NBC Latino, the Guardian, and the Miami Herald; it has been adopted as an all-campus read at over twenty-five American universities. Her short stories have been honored with the Iowa Short Fiction Award, an O. Henry Prize, and other awards. Raised in Miami, Florida, she is an associate professor in the Department of English and the Institute for Ethnic Studies at the University of Nebraska.

“Jennine Capó Crucet's smart, scathing, and hilarious depiction of a Cuban-American girl at a fancy northeastern university is set in 1999 - and involves and Elián González-inspired subplot - but its incisive take on race and class makes it both urgently of-the-moment and destined to be a classic.” —Curtis Sittenfeld, Vanity Fair

“Heartfelt...Being caught between two cultures is a usefully troubling condition for the writer intent on dramatizing the confusion, pain and humor of having what Crucet calls "double vision," and Crucet, the award-winning author of a story collection delivers on all three. Sharp cultural observations and terrific dialogue keep the reader engaged.” —Kathryn Ma, New York Times Book Review

“Few [debut novels] are as furious, funny, or thorny as this one... Crucet captures the vernacular of Lizet's world at home and the unbearable alienation in her campus life with a realness that's hard to forget.” —Entertainment Weekly

“Superb... Crucet expertly summons the wrenching disconnect between immigrant parents and their offspring... With this personal coming-of-age novel, Crucet offers us a piercing window into what it means to grow up.” —Miami Herald

“If you've ever felt out of your depth, you'll instantly connect with Lizet Ramirez, the protagonist of the new novel Make Your Home Among Strangers ... Her eye-opening year will encourage you to replace other people's expectations of you with your own.” —Redbook

“Jennine Capó Crucet renders this coming-of-age story with dazzling élan, full of moment both bittersweet and messy, heartfelt and honest. This is the type of debut novel that leaves you wanting more - in a good way. I can't wait to see what Crucet does next.” —Buzzfeed

“In her remarkable debut, Jennine Capó Crucet writes authentically about the experience of being Cuban-American on a macro scale, but also about the smaller heartaches of embarking on adulthood far from home.” —Bustle

“In this dazzling debut novel, a young female protagonist is also caught between the impulse to define herself independently of her family's past and the pressure to never stray far from home and its bittersweet cultural values.” —NBC Latino

“A classic coming of age tale... It's a playful and touching look at Miami and the lives that are lived in it, and it's definitely worth reading. Crucet just might be the literary voice that the Magic City has been waiting for.” —Miami New Times

“A thrilling, deeply fulfilling journey of a young woman stepping into her own power. This debut novel from Crucet heralds the birth of a talented novelist to watch.” —Kirkus, starred review

“An unusually comic and wise look at the dream of leaving home and that dream's ambivalent reality . . . as fun to read as it is essential. Crucet writes with insight and flair about resilience, loyalty, and the fight to find home again once you've left it.” —Ploughshares

“Jennine Capó Crucet's sharply observed first novel captures the profound disorientation of leaving the world that reared you: once you have made your home among strangers, home itself often transforms into a strange place. Recounted with wry humor and heartbreaking honesty, Lizet's struggle is a poignant exploration of a young woman's evolving relationship to her culture, her family, and her own identity.” —Celeste Ng, author of Everything I Never Told You

“Make Your Home Among Strangers is a vivid, exuberant novel begging to devoured in one sitting. Hilarious and relentlessly honest, our narrator Lizet is the embodiment of the guilt, anger, and chronic homesickness so often the side effects of being educated away from who you once were. Hers is an utterly American story, yet one hardly told, and Jennine Capó Crucet tells it with a combination of wisdom and urgency that is as rare as it is invigorating.” —Claire Vaye Watkins, author of Battleborn

“Anyone who has read Jennine Capó Crucet's story collection, How to Leave Hialeah, knows that she is a wonderful writer. Still, I was unprepared for the power of her debut novel, Make Your Home Among Strangers, which I found wise and honest, a love letter to Miami that doubles as a furious and funny manifesto about cultural and familial expectations.” —Lauren Groff, author of The Monsters of Templeton and Arcadia

“Make Your Home Among Strangers is a gorgeous, sad, and poignantly hysterical exploration of what it means to be homesick for a place that doesn't exist. As Lizet moves between experiences of displacement and recreates the story of who she is over and over again, she is both pulled away from the friends and family who no longer recognize her day to day life, and drawn into a closer understanding of what it has meant for each of the people she loves to define the trajectory of how they got from the places they started to the places they find themselves. Crucet is a distinct and important voice, and this novel is both a profound pleasure to read and a painful reminder of the real human costs of living in two places at once.” —Danielle Evans, author of Before You Suffocate Your Own Fool Self, winner of the 2011 PEN American Robert W. Bingham Prize

“Crucet's first novel is a masterpiece of contemporary fiction that dramatizes the intersection of race, class, geography, and education and shows the effects of being American on the human heart. Crucet manages the layers of self and emotion of her characters with wisdom and intelligence to create a commanding, urgent coming-of-age story. First class work.” —David Treuer, author of Rez Life: An Indian's Journey Through Reservation Life and Little

“Crucet brilliantly brings to life the experience of a first-generation college student navigating an all-too-realistic elite school in an age where diversity initiatives do little to offset the air of privilege that permeates its halls, customs and--especially--its dormitories. Lizet is a heroine who is not only thoroughly believable but one we can't help but root for.” —Adelle Waldman, author of The Love Affairs of Nathaniel P.