Flood of Fire: A Novel (The Ibis Trilogy #3) (Paperback) 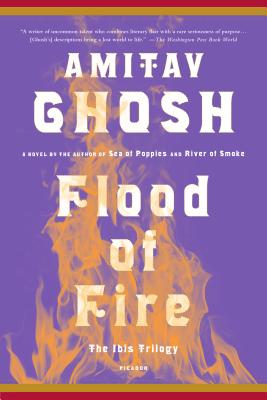 Flood of Fire: A Novel (The Ibis Trilogy #3) (Paperback)

This is book number 3 in the The Ibis Trilogy series.

The stunningly vibrant final novel in the bestselling Ibis Trilogy from Amitav Ghosh, Flood of Fire.

It is 1839 and China has embargoed the trade of opium, yet too much is at stake in the lucrative business and the British Foreign Secretary has ordered the colonial government in India to assemble an expeditionary force for an attack to reinstate the trade. Among those consigned is Kesri Singh, a soldier in the army of the East India Company. He makes his way eastward on the Hind, a transport ship that will carry him from Bengal to Hong Kong.

Along the way, many characters from the Ibis Trilogy come aboard, including Zachary Reid, a young American speculator in opium futures, and Shireen, the widow of an opium merchant whose mysterious death in China has compelled her to seek out his lost son. The Hind docks in Hong Kong just as war breaks out and opium is “pouring into the market like monsoon flood.” From Bombay to Calcutta, from naval engagements to the decks of a hospital ship, among embezzlement, profiteering, and espionage, Amitav Ghosh’s Flood of Fire charts a breathless course through the culminating moment of the British opium trade and vexed colonial history.

AMITAV GHOSH is the internationally bestselling author of many works of fiction and nonfiction, including The Glass Palace, The Great Derangement, and the Ibis Trilogy (Sea of Poppies, River of Smoke, and Flood of Fire). He is the recipient of numerous awards and prizes. Ghosh divides his time between Kolkata and Goa, India, and Brooklyn, New York.

“Ghosh imbues his narrative with historical sweep and the lavish sights and sounds of southern Asia, beautifully dramatizing the rise of Hong Kong and the strained legacy of European colonialism.” —O: The Oprah Magazine

“[Flood of Fire] brims with wonderful historical details, clearly the result of prodigious research. . . . Ghosh has so much passion for his subject, so much care for his characters and such a command of his prose that readers will find it easy to surrender to the story.” —Laila Lalami, The New York Times Book Review

“Flood of Fire is, for my money, the best of the three volumes: It adds colorful threads to the plot, weaving them into the existing story and tying them off in a most satisfactory way. Further, the novel provides highly dramatic depictions of key land and sea battles of the First Opium War. Beyond that, it presents a savvy account of the influence of the opium lobby on British foreign policy and the mental contortions of the "Apostles of Liberty" who identified the diabolical trade, so destructive of the people of both India and China, with freedom, commercial righteousness and religious enlightenment - all virtuously bestowed with guns and gunboats.” —Katherine A. Powers, Chicago Tribune

“[Combines] a historian's affection for the archive with an anthropologist's appreciation of the thickness of local realities and a novelist's gift for plot, character, and language . . . Ghosh fashions a history that seems always on the move, vibrantly and restlessly progressing toward its conclusion.” —Bookforum

“A writer of uncommon talent who combines literary flair with a rare seriousness of purpose . . . His descriptions bring a lost world to life.” —The Washington Post Book World

“Dashing . . . This novel unfolds like those paper landscapes that expand under water: Each character, each situation, expands into its own world. All are woven into a four-dimensional tapestry depicting the explosive force of cultural exchange driven by the immense wealth to be derived from unchained desire.” —Ann Klefstad,Minneapolis Star Tribune

“The [Ibis Trilogy] books are not only operatic-big personalities, lots of drama-but a compelling and vividly imagined chronicling of the height of British colonialism, and the development of modern Asia.” —Hanya Yanagihara, author of A Little Life, Harper's Bazaar

“A writer of supreme skill and intelligence.” —The Atlantic Monthly