Pandemic: Tracking Contagions, from Cholera to Ebola and Beyond (Paperback) 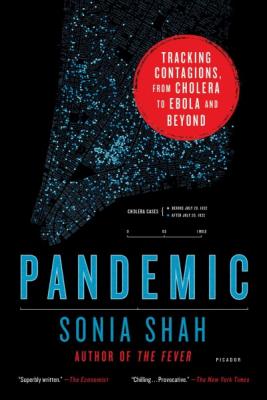 Pandemic: Tracking Contagions, from Cholera to Ebola and Beyond (Paperback)

Prizewinning science journalist Sonia Shah presents a startling examination of the pandemics that have ravaged humanity—and shows us how history can prepare us to confront the most serious acute global health emergency of our time.

Over the past fifty years, more than three hundred infectious diseases have either emerged or reemerged, appearing in places where they’ve never before been seen. Years before the sudden arrival of COVID-19, ninety percent of epidemiologists predicted that one of them would cause a deadly pandemic sometime in the next two generations. It might be Ebola, avian flu, a drug-resistant superbug, or something completely new, like the novel virus the world is confronting today. While it was impossible to predict the emergence of SARS-CoV-2—and it remains impossible to predict which pathogen will cause the next global outbreak—by unraveling the stories of pandemics past we can begin to better understand our own future, and to prepare for what it holds in store.

In Pandemic: Tracking Contagions, from Cholera to Ebola and Beyond, Sonia Shah interweaves history, original reportage, and personal narrative to explore the origins of epidemics, drawing parallels between cholera—one of history’s most deadly and disruptive pandemic-causing pathogens—and the new diseases that stalk humankind today. She tracks each stage of cholera’s dramatic journey, from its emergence in the South Asian hinterlands as a harmless microbe to its rapid dispersal across the nineteenth-century world, all the way to its latest beachhead in Haiti. Along the way she reports on the pathogens now following in cholera’s footsteps, from the MRSA bacterium that besieges her own family to the never-before-seen killers coming out of China’s wet markets, the surgical wards of New Delhi, and the suburban backyards of the East Coast.

Delving into the convoluted science, strange politics, and checkered history of one of the world’s deadliest diseases, Pandemic is a work of epidemiological history like no other, with urgent lessons for our own time.

“Shah proves a disquieting Virgil, guiding us through the hells ruled by [infectious diseases] . . . the power of Shah's account lies in her ability to track simultaneously the multiple dimensions of the public-health crises we are facing.” —The Chicago Tribune

Sonia Shah is a science journalist and prizewinning author. Her writing on science, politics, and human rights has appeared in The New York Times, The Wall Street Journal, Foreign Affairs, Scientific American, and elsewhere, and she has been featured on Radiolab, Fresh Air, and TED.com, where her talk “Three Reasons We Still Haven’t Gotten Rid of Malaria” has been viewed by more than a million people around the world. Her book The Fever was long-listed for the Royal Society’s Winton Prize for Science Books, and Pandemic was named a finalist for the Los Angeles Times Book Prize and a New York Times Book Review Editors' Choice.

"Shah's book should be required reading." —The New York Review of Books

"The world’s ability to put the lid on pandemics has come a long way since the days when the plague, cholera and smallpox ravaged unchecked. Ms Shah’s book is a superbly written account of how we got here and what might await us." —The Economist

“Investigative science journalist Shah (The Fever, 2011) is at it again, and if the words, and beyond, in her latest book’s subtitle don’t grab a reader’s attention, they should . . . Yes, Shah is back and in rare form. And this time it’s personal.”—Donna Chavez, Booklist (starred review)

“Shah proves a disquieting Virgil, guiding us through the hells ruled by [infectious diseases] . . . the power of Shah's account lies in her ability to track simultaneously the multiple dimensions of the public-health crises we are facing.” —The Chicago Tribune

“In this absorbing, complex, and ominous look at the dangers posed by pathogens in our daily lives, science journalist Shah (The Fever) cautions that there are no easy solutions . . . Shah’s warning is certainly troubling, and this important medical and social history is worthy of attention—and action." —Publishers Weekly

Praise for The Fever

“An often rollicking read . . . Shah has put together an engrossing cast of doctors, malariologists and historical figures.” —TIM MORRISON, Time

“Sonia Shah ’s tour-de-force history of malaria will convince you that the real sound track to our collective fate [is] the syncopated whine-slap, whine-slap of man and mosquito duking it out over the eons.” —ABIGAIL ZUGER , M . D ., The New York Times

“This insightful book explores the human struggle with malaria not just from a scientific angle, which is cogently detailed without being overwhelming, but also from sociological and anthropological perspectives . . . Shah is to be commended.” —DENNIS ROSEN, The Boston Globe

“The lessons of history should give us pause . . . Many [issues] are brilliantly exposed in Ms. Shah’s book .” — W. F . B YNUM, The Wall Street Journal

“Meticulously researched and passionately written . . . One of this year ’s most significant science books for the general reader.” —DAVID WALTON, The Plain Dealer (Cleveland)