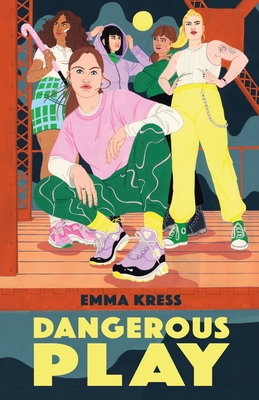 A fierce team of girls takes back the night in this propulsive, electrifying, and high-stakes YA debut from Emma Kress

Zoe Alamandar has one goal: win the State Field Hockey Championships and earn a scholarship that will get her the hell out of Central New York. She and her co-captain Ava Cervantes have assembled a fierce team of dedicated girls who will work hard and play by the rules.

But after Zoe is sexually assaulted at a party, she finds a new goal: make sure no girl feels unsafe again. Zoe and her teammates decide to stop playing by the rules and take justice into their own hands. Soon, their suburban town has a team of superheroes meting out punishments, but one night of vigilantism may cost Zoe her team, the championship, her scholarship, and her future.

Perfect for fans who loved the female friendships of Jennifer Mathieu’s Moxie and the bite of Courtney Summer’s Sadie.

Emma Kress is a former teacher of almost 20 years, teaching high school English for more than 10 years. She was a finalist for 2014 New York State Teacher of the Year and an award-winning educational columnist for a CNY magazine. Before her teaching career, Emma worked at the Victim Services Agency (now known as Safe Horizon), the NYC Rape Treatment Consortium, and as a sexual violence peer counselor who also facilitated workshops on sexual assault and consent with teens.

"[Kress] renders Zoe’s trauma unflinchingly and compassionately, making this a worthwhile look at sexism and the healing power of speaking out—as well as a passionate love letter to an underappreciated sport." —Publishers Weekly

"Readers will cheer for Zoe and her ­team---on and off the field." —School Library Journal

"Kress' engrossing debut is all about agency, and in addition to frequent game play-by-plays that will appeal to fans of sports novels, this will make an empowering addition to #MeToo collections." —Booklist

“Kress’s fierce characters show that, together, girls can be something bigger. Their story shows how loyalty, dedication, and an occasional bent rule can make the world a better place.” —Adrienne Kisner, author of Six Angry Girls and Dear Rachel Maddow

“Vibrant, daring, and deep, Dangerous Play is both a thrilling ride and a profound exploration of female friendship, rape culture, and the difficulty of doing the right thing in a world built on wrongs. An unflinching and empowering debut.” —Corey Ann Haydu, author of Ever Cursed

"I want to put this book in the hands of every teenager I know. For anyone - especially any girl - who needs to find the power that comes from speaking up and speaking out, this gorgeous debut is a game-changer." —Rachel Person, Northshire Bookstore, Saratoga Springs