Buses Are a Comin': Memoir of a Freedom Rider (Paperback) 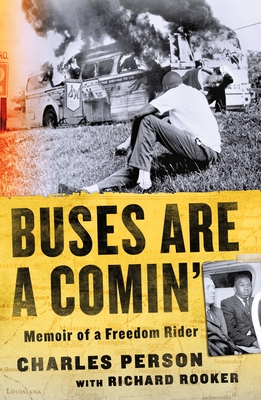 Buses Are a Comin': Memoir of a Freedom Rider (Paperback)

A firsthand exploration of the cost of boarding the bus of change to move America forward—written by one of the Civil Rights Movement's pioneers.

Two buses proceeded through Virginia, North and South Carolina, to Georgia where they were greeted by Dr. Martin Luther King Jr., and finally to Alabama. There, the Freedom Riders found their answer: No. Southern states would continue to disregard federal law and use violence to enforce racial segregation. One bus was burned to a shell, its riders narrowly escaping; the second, which Charles rode, was set upon by a mob that beat several riders nearly to death.

Buses Are a Comin’ provides a front-row view of the struggle to belong in America, as Charles Person accompanies his colleagues off the bus, into the station, into the mob, and into history to help defeat segregation’s violent grip on African American lives. It is also a challenge from a teenager of a previous era to the young people of today: become agents of transformation. Stand firm. Create a more just and moral country where students have a voice, youth can make a difference, and everyone belongs.

CHARLES PERSON is the only living Freedom Rider who remained with the original Ride from its start in Washington, D.C. to its end in New Orleans. This historic event helped defeat Jim Crow laws in the U.S. A sought-after public speaker, Charles maintains active contacts with schools, museums and the activist community.

RICHARD ROOKER is an English and history educator, writing coach, and longtime personal friend of Charles Person. He is an active board member of the Indiana Historical Society.

"Civil rights activist Person debuts with a striking personal history of the 1961 Freedom Rides...Shot through with vivid details of beatdowns, arrests, and awe-inspiring bravery, this inspirational account captures the magnitude of what the early civil rights movement was up against."
—Publishers Weekly, starred review

"This dynamic narrative…serves as a reflection of what it means to belong in America, then and now. The depth with which the author examines not just his own story, but that of his fellow riders, gives a multifaceted perspective that clearly demonstrates why each was committed to the cause. A vital story, this memoir is also an instructive gift to future generations fighting for change."
—Kirkus, starred review

"Buses Are a Comin’ chronicles Person’s political coming of age during the civil rights movement. [His] memoir is a sobering, first-person account of that historic bus ride."
—Atlanta Journal-Constitution

"Person’s engagingly rendered, intimate testimony offers a look at the power of character and conviction among grassroots activists who paid the painful price of direct action to penetrate America’s consciousness."
—Library Journal

"This is a book you hand to readers too young to remember the Civil Rights Movement. It honors and it sings out names. Read it; Buses Are A Comin' will keep you in your seat."
—Terri Schlichenmeyer

“An enthralling account of the American Civil Rights Movement and an impassioned call to action.”
—BookBrowse

"A compelling narrative, rich in its description of the searing brutality of white racists opposed to the Freedom Rides of 1961, powerful in its depiction of the courage of civil rights protestors."
—William H. Chafe, Alice Mary Baldwin Professor of History, emeritus, Duke University; former president, Organization of American Historians, author of Civilities and Civil Rights and The Rise and Fall of the American Century

"Charles Person's book is a very personal, poignant and political account of his life's evolution. It is especially revelatory for young males (of any ethnicity) in their sacred search for 'self, relevance and calling.' It is a vivid personal snapshot of his coming of age. He fully exposes his life's journey: genuinely and movingly. His legacy is well established in this writing. He reminds us of the debt that we owe for the life that we have been given; and that to whom much is given and entrusted, much more is required."
—Rev. Dr. Carolyn M McKinstry, author of While the World Watched

"Buses Are a Comin' is the most complete recounting we have of any of the Freedom Riders' experiences during those epochal days of 1961, and is at times lyrical, always insightful, and reveals a true American hero who is humble and appreciative. But Charles Person also subtly wants to exhort others, this and future generations, to 'get on the bus' and challenge inequality and injustice."
—Derek Catsam, Professor of History and Kathlyn Cosper Dunagan Professor in the Humanities, University of Texas-Permian Basin, and author of Freedom's Main Line: The Journey of Reconciliation and the Freedom Rides

"Charles Person’s searing memoir of the original May 1961 Freedom Ride organized by the Congress of Racial Equality is an extraordinary document of physical and moral courage. As the youngest of the original thirteen Freedom Riders, and as one of the Riders subjected to a savage beating by a group of white supremacist thugs at a Birmingham bus terminal, Person tells a tale both frightening and empowering. That he survived to relate this tale with his own powerful voice is a blessing for us all."
—Raymond Arsenault, author of Freedom Riders: 1961 and the Struggle for Racial Justice