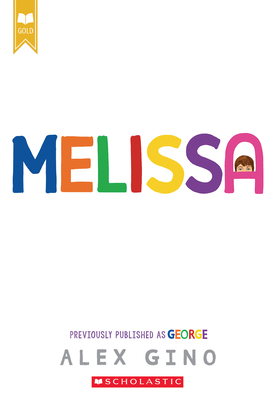 BE WHO YOU ARE.

Melissa thinks she'll have to keep this a secret forever. Then her teacher announces that their class play is going to be Charlotte's Web. Melissa really, really, REALLY wants to play Charlotte. But the teacher says she can't even try out for the part... because she's a boy.

With the help of her best friend, Kelly, Melissa comes up with a plan. Not just so she can be Charlotte -- but so everyone can know who she is, once and for all.

Alex Gino loves glitter, ice cream, gardening, awe-ful puns, and stories that reflect the diversity and complexity of being alive. Their first novel, Melissa, was a winner of the Children’s Stonewall Award, the Lambda Literary Award, and the Children’s Choice Book Award. For more about Alex, please visit them at alexgino.com.

Winner of the Stonewall Award

Winner of the Lambda Literary Award

"Profound, moving, and -- as Charlotte would say -- radiant, this book will stay with anyone lucky enough to find it." -- Publishers Weekly, starred review

Praise for You Don't Know Everything, Jilly P!:

"Gino's sophomore effort is every bit as affecting and important as their first." -- School Library Journal, starred review