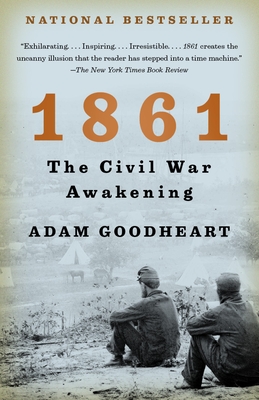 A gripping and original account of how the Civil War began and a second American revolution unfolded, setting Abraham Lincoln on the path to greatness and millions of slaves on the road to freedom.

An epic of courage and heroism beyond the battlefields, 1861 introduces us to a heretofore little-known cast of Civil War heroes—among them an acrobatic militia colonel, an explorer’s wife, an idealistic band of German immigrants, a regiment of New York City firemen, a community of Virginia slaves, and a young college professor who would one day become president. Their stories take us from the corridors of the White House to the slums of Manhattan, from the waters of the Chesapeake to the deserts of Nevada, from Boston Common to Alcatraz Island, vividly evoking the Union at its moment of ultimate crisis and decision.  Hailed as “exhilarating….Inspiring…Irresistible…” by The New York Times Book Review, Adam Goodheart’s bestseller 1861 is an important addition to the Civil War canon.

Adam Goodheart is a historian, essayist, and journalist. His articles have appeared in National Geographic, Outside, Smithsonian, The Atlantic, and The New York Times Magazine, among others, and he is a regular columnist for The New York Times’s acclaimed online Civil War series, Disunion. He lives in Washington, D.C., and on the Eastern Shore of Maryland, where he is the Hodson Trust-Griswold Director of Washington College’s C. V. Starr Center for the Study of the American Experience.

“Exhilarating. . . . Inspiring. . . . Irresistible. . . . 1861 creates the uncanny illusion that the reader has stepped into a time machine.”
—The New York Times Book Review

“A huge contribution. . . . Hardly a page of this book lacks an insight of importance or a fact that beguiles the reader.”
—The Boston Globe

“Adam Goodheart is a Monet with a pen instead of a paintbrush.”
—James M. McPherson, Pulitzer Prize-winning author of Battle Cry of Freedom

“Goodheart writes with precision, beauty and understanding. The books will renew one’s excitement about reading history.”
—The Albuquerque Journal

“Goodheart shows us that even at 150 years’ distance there are new voices, and new stories, to be heard about the Civil War, and that together they can have real meaning. . . . He takes what is known, breaks it down to its elemental parts and rearranges it, giving us a different view entirely of something we thought we understood entirely.”
—The Boston Globe

“1861 is the best book I have ever read on the start of the Civil War. . . . Penetrating, eloquent, and deeply moving, this is a classic introduction to the nation’s greatest conflict.”
—Tony Horwitz, winner of the Pulitzer Prize and author of Confederates in the Attic

“Eloquent. . . . Gripping. . . . Goodheart gives readers a sense of what it was like to have been there.”
—St. Louis Post-Dispatch

“Marvelous. . . . Goodheart brings us into the world of mid-nineteenth-century America, as ambiguous and ambitious and fractured as the times we live in now, and he brings to pulsing life the hearts and minds of its American citizens.”
—The Huffington Post

“Doing what David McCullough’s 1776 did for the American Revolution, Goodheart’s book delivers a remarkably original and gripping account of the year the Civil War began.”
—History Book Club

“Goodheart is an elegant writer and this is a highly readable introduction to America’s great civil conflict.”
—The Seattle Times

“A compelling look at the country’s dawning realization that this would be much more than a quickly resolved conflict over slavery, through the experiences of a fascinating cast of characters given short shrift (if any shrift at all) in previous Civil War books.”
—The Star-Ledger

“Goodheart’s book stands out . . . for the author’s deft narrative style and vivid description. . . . [He] conjures a remarkable cast of individual Americans—from slaves and foot soldiers to the occupant of the Oval Office—using their stories to evoke a national watershed.”
—The Times-Picayune

“An impressive accomplishment, a delightful read, and a valuable contribution that will entertain and challenge popular and professional audiences alike.”
—Harvard Magazine

“With boundless verve, Adam Goodheart has sketched an uncommonly rich tableau of America on the cusp of the Civil War. The research is impeccable, the cast of little-known characters we are introduced to is thoroughly fascinating, the book is utterly thought-provoking, and the story is luminescent. What a triumph.”
—Jay Winik, author of April 1865 and The Great Upheaval