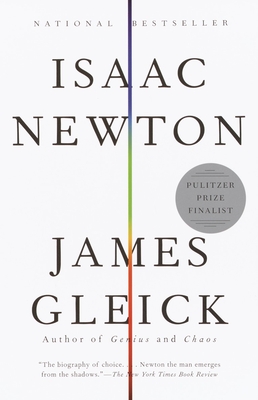 By James Gleick
List Price: $16.95
Our Price: $15.95
(Save: $1.00 6%)
On Our Shelves Now
Isaac Newton was born in a stone farmhouse in 1642, fatherless and unwanted by his mother. When he died in London in 1727 he was so renowned he was given a state funeral—an unheard-of honor for a subject whose achievements were in the realm of the intellect. During the years he was an irascible presence at Trinity College, Cambridge, Newton imagined properties of nature and gave them names—mass, gravity, velocity—things our science now takes for granted. Inspired by Aristotle, spurred on by Galileo’s discoveries and the philosophy of Descartes, Newton grasped the intangible and dared to take its measure, a leap of the mind unparalleled in his generation.

James Gleick, the author of Chaos and Genius, and one of the most acclaimed science writers of his generation, brings the reader into Newton’s reclusive life and provides startlingly clear explanations of the concepts that changed forever our perception of bodies, rest, and motion—ideas so basic to the twenty-first century, it can truly be said: We are all Newtonians.
JAMES GLEICK is our leading chronicler of science and technology, the best-selling author of Chaos: Making a New Science, Genius: The Life and Science of Richard Feynman, and The Information: A History, a Theory, a Flood. His books have been translated into thirty languages.

“A masterpiece of brevity and concentration. Isaac Newton sees its angular subject in the round, presenting him as scientist and magician, believer and heretic, monster and man. . . . It will surely stand as the definitive study for a very long time to come. Fortunate Newton!” --John Banville, The Guardian

“Gleick [is] a clever tour guide to the minds of great geniuses. . . . Isaac Newton sheds new light on the difficult personality of a deeply enigmatic figure.” --Seattle Post-Intellignceer

“Elegant, jewel-like…he does not waste a word… Gleick has given us the man and his mind in their full crazyness.” --The New York Times

“A compelling page-turner. . . . Gleick [is] a clever tour guide to the minds of great geniuses. Isaac Newton sheds new light on the difficult personality of a deeply enigmatic figure.” --Seattle Post-Intelligencer

“Beautifully flesh[es] out the alchemical dialectic, its balancing act between the spiritual and the gross.” —The Boston Globe

“An elegantly written, insightful work that brings Newton to life and does him justice. . . . Gleick proves to be not only a sound explicator of Newton's science but also a capable literary stylist, whose understated empathy with his subject lets us almost see through Newton's eyes.” —Los Angeles Times

“For the casual reader with a serious interest in Newton’s life and work, I recommend Gleick’s biography as an excellent place to start. It has three important virtues. It is accurate, it is readable, and it is short…. Gleick has gone back to the original notebooks and brought [Newton] to life.” —Freeman Dyson, The New York Review of Books

“Written with enormous enthusiasm and verve and in a style that is often closer to poetry than prose. [Gleick] explains the fundamentals with clarity and grace. His ease with the science is the key to the book’s delight.” —The Economist

“[Gleick is] one of the best science writers of our time. . . . He has exhumed from mountains of historical documents and letters a compelling portrait of a man who held the cards of his genius and near madness close to his chest. Gleick’s book [is] hard to put down.” —Toronto Globe and Mail

“Brilliant. . . . The great scientist is brought into sharp focus and made more accessible. Highly recommended.” —The Tucson Citizen

“Marvellously rich, elegant and poetic. . . . [Gleick’s] great talent is the ability to unravel complex ideas without talking down. Books on Newton abound, but Gleick’s fresh, intimate and beautifully composed account succeeds where many fail, in eloquently dramatizing the strange power of his subject’s vision.” --The Times (London)

“Gleick . . . has transformed mainstream academic research into an exciting story. Gleick has done a marvelous job of recreating intellectual life in Britain around the end of the 17th century. He excels at translating esoteric discussions into clear, simple explanations that make sense to modern people.” —Science

“James Gleick . . . makes the most of his extraordinary material, providing us with a deftly crafted vision of the great mathematician as a creator, and victim, of his age. . . . [Isaac Newton] is a perfect antidote to the many vast, bloated scientific biographies that currently flood the market--and also acts a superb starting point for anyone interested in the life of one of the world's few, undisputed geniuses.” --The Observer

“Gleick . . . brings to bear on Newton’s life and thought the same clarity of understanding and expression that brought order to chaos in his first volume [Chaos: Making a New Science].” —The Daily Herald

“Moving . . . [Gleick’s] biography is perhaps the most accessible to date. He is an elegant writer, brisk without being shallow, excellent on the essence of the work, and revealing in his account of Newton’s dealings with the times.” —Financial Times

“You can’t get much more entertaining than Isaac Newton–as described by James Gleick, that is.” —The San Diego Union-Tribune

“Huge in scope and profound in depth. . . . The extent of Newton’s genius is revealed in breathtaking detail. . . . A remarkable and challenging work and does full justice to its subject.” --Yorkshire Evening Post