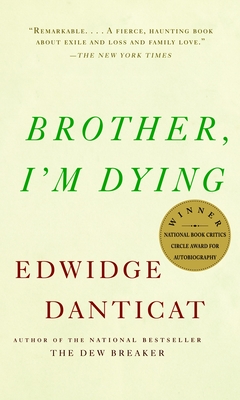 From the age of four, award-winning writer Edwidge Danticat came to think of her uncle Joseph as her “second father,” when she was placed in his care after her parents left Haiti for America. And so she was both elated and saddened when, at twelve, she joined her parents and youngest brothers in New York City. As Edwidge made a life in a new country, adjusting to being far away from so many who she loved, she and her family continued to fear for the safety of those still in Haiti as the political situation deteriorated.

In 2004, they entered into a terrifying tale of good people caught up in events beyond their control. Brother I'm Dying is an astonishing true-life epic, told on an intimate scale by one of our finest writers.

“Remarkable. . . . A fierce, haunting book about exile and loss and family love.” —The New York Times

"With a storyteller's magnetic force . . . [Danticat] gives voice to an attachment too deep for words.” —O, The Oprah Magazine

“Powerful. . . . Danticat employs the charms of a storyteller and the authority of a witness to evoke the political forces and personal sacrifices behind her parents' journey to this country and her uncle's decision to stay behind.” —The Washington Post Book World

“Heartwrenching, intimate. . . . Through the seemingly effortless grace of Danticat's words, a family's tragedy is transformed into a promise of collective hope.” —San Francisco Chronicle

“Her power of language is so great, and at the same time, so subtle, that even those that cannot see her or understand her stories will be transformed by her impact on their world.” —Walter Mosley