Hide in Plain Sight: The Hollywood Blacklistees in Film and Television, 1950-2002 (Paperback) 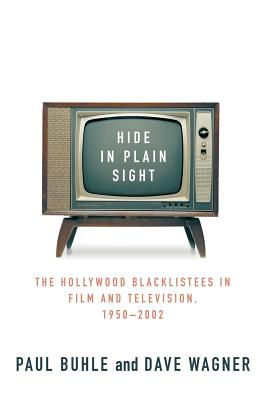 Hide in Plain Sight: The Hollywood Blacklistees in Film and Television, 1950-2002 (Paperback)

By Paul Buhle, Dave Wagner
List Price: $23.99
Our Price: $17.95
(Save: $6.04 25%)
On Our Shelves Now
Hide in Plain Sight offers a powerful examination of the effects of Hollywood's blacklist era, taking up the question of how blacklistees fared after they were driven out of the mainstream. A good number entered careers in television, with many finding work in children's and family programs, writing for shows like Rocky and Bullwinkle, Lassie, and Flipper. Many also wrote adult sitcoms such as Hogan's Heroes,The Donna Reed Show, The Dick Van Dyke Show, M*A*S*H, Maude, and All in the Family. Ultimately, many returned to Hollywood in the sixties and seventies to work creatively on films that contained a dose of the radical politics found in communism, films that influenced the creative outburst of that decade. The list of impressive films from the survivors of HUAC includes Bridge on the River Kwai, Lawrence of Arabia, and Midnight Cowboy. Hide in Plain Sight completes Paul Buhle and Dave Wagner's trilogy, which includes Tender Comrades (1998) and Radical Hollywood (2002). Together these books provide a thorough and disturbing portrait of the McCarthy era's impact on an important aspect of American culture and society.
Paul Buhle is a senior lecturer in history at Brown University and the editor of the Encyclopedia of the American Left, among other books. He lives in Providence, Rhode Island.

Dave Wagner has co-authored a number of books with Paul Buhle, including the recent Radical Hollywood.

“...an illuminating and timely reminder of a dark chapter in Hollywood history.” —Stephen Rees, Library Journal

“This encyclopedic, riveting study of the Hollywood blacklist's impact follows the careers of targeted individuals to explore the blacklist's effects...” —Publishers Weekly