My Soul to Take: A Novel (Paperback) 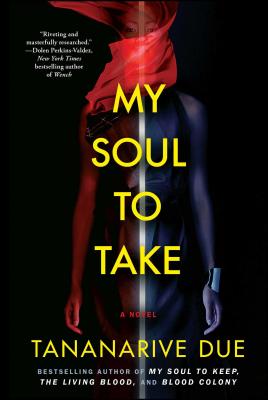 My Soul to Take: A Novel (Paperback)

By Tananarive Due
List Price: $18.00
Our Price: $14.00
(Save: $4.00 22%)
On Our Shelves Now
Essence bestselling and award-winning author Tananarive Due delivers a heart-stopping new novel continuing the story of descendants of an immortal line of people who are the only ones capable of saving the world.

Fana, an immortal with tremendous telepathic abilities, is locked in a battle of wills. Her fiancé is Michel. But Johnny Wright, a mortal who is in love with her, believes that if she doesn’t stay away from Michel, they will become the Witnesses to the Apocalypse described in the Book of Revelation.

Fana and the Life Brothers are rushing to distribute their healing “Living Blood” throughout the world, hoping to eliminate most diseases before Fana is bound to marry Michel. Still, they cannot heal people faster than Michel can kill them. Due weaves a tangled web in this novel, including beloved characters from her bestselling Joplin’s Ghost, in a war of good against evil, making My Soul to Take a chilling and thrilling experience.
Tananarive Due is an American Book Award–winning, Essence bestselling author of sixteen books, including the Blood Colony, The Living Blood, The Good House, Joplin’s Ghost, and Devil’s Wake. She was also a contributor to Jonathan Maberry’s middle grade anthology, Don’t Turn Out the Lights. She has won an American Book Award, an NAACP Image Award, and a British Fantasy Award. She teaches Black Horror and Afrofuturism at UCLA. She lives in Atlanta, Georgia. Visit her website TananariveDue.com.
"Pain, joy, love, madness, and ancient secrets rampage through this smart, beautifully-paced book. Tananarive Due is one of the great heroines of our literature." --Peter Straub, New York Times bestselling author of A Dark Matter

“Brilliant, moody, dark and delicious, My Soul To Take is Tananarive Due's best so far, and that is saying a LOT. Absolutely recommended.” –Jonathan Maberry, New York Times bestselling author of The King of Plagues and Dust & Decay

“The world of My Soul to Take is so enchantingly drawn I could not help but be caught in its spell. From California to Ethiopia to Mexico, Tananarive Due takes you on a nonstop ride that will leave you breathless.” —Dolen Perkins-Valdez, New York Times bestselling author of Wench