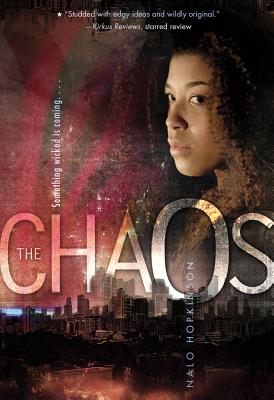 By Nalo Hopkinson
List Price: $11.99
Our Price: $9.99
(Save: $2.00 17%)
On Our Shelves Now
Navigate between myth and chaos in this “journey filled with peril, self-discovery, and terrifying moments” (Publishers Weekly, starred review).

Sixteen-year-old Scotch struggles to fit in—at home she’s the perfect daughter, at school she’s provocatively sassy, and thanks to her mixed heritage, she doesn’t feel she belongs with the Caribbeans, whites, or blacks. And even more troubling, lately her skin is becoming covered in a sticky black substance that can’t be removed.

While trying to cope with this creepiness, she goes out with her brother—and he disappears. A mysterious bubble of light just swallows him up, and Scotch has no idea how to find him. Soon, the Chaos that has claimed her brother affects the city at large, until it seems like everyone is turning into crazy creatures. Scotch needs to get to the bottom of this supernatural situation ASAP before the Chaos consumes everything she’s ever known—and she knows that the black shadowy entity that’s begun trailing her every move is probably not going to help.

A blend of fantasy and Caribbean folklore, at its heart this tale is about identity and self-acceptance—because only by acknowledging her imperfections can Scotch hope to save her brother.
Nalo Hopkinson is the award-winning author of numerous novels and short stories for adults. Nalo grew up in Jamaica, Trinidad, and Guyana before moving to Canada when she was sixteen. The Chaos is her first young adult novel. Visit her at NaloHopkinson.com.

* "Mixing mythology and massively ­surreal events, adult fantasy author Hop­kinson (The Salt Roads) explores questions of identity and image in her YA debut, set against the backdrop of a world gone mad. . . . Hopkinson’s use of language and imagery is almost magical, and her characters add much-appreciated diversity to the genre."--Publishers Weekly, *STAR

"[Scotch] proves to be a compelling anchor for a tale in which, for a while at least, it seems that literally anything can happen. Hopkinson’s joy of invention is palpable, and despite its darker edges, it’s that joy in the possibilities of the imagination that I hope comes through to younger readers. Come to think of it, we could all use a dose of it."--Locus