A Hole at the Bottom of the Sea: The Race to Kill the BP Oil Gusher (Hardcover) 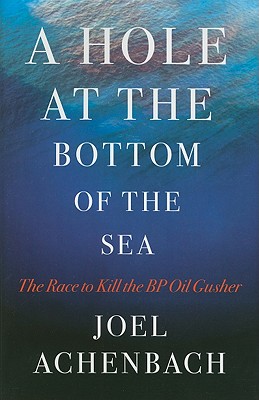 A Hole at the Bottom of the Sea: The Race to Kill the BP Oil Gusher (Hardcover)


On Our Shelves Now
It was a technological crisis in an alien realm: a blown-out oil well in mile-deep water in the Gulf of Mexico. For the engineers who had to kill the well, this was like Apollo 13, a crisis no one saw coming, and one of untold danger and challenge.

A suspense story, a mystery, a technological thriller: This is Joel Achenbach’s groundbreaking account of the Deepwater Horizon disaster and what came after. The tragic explosion on the huge drilling rig in April 2010 killed eleven men and triggered an environmental disaster. As a gusher of crude surged into the Gulf’s waters, BP engineers and government scientists—awkwardly teamed in Houston—raced to devise ways to plug the Macondo well.

Achenbach, a veteran reporter for The Washington Post and acclaimed science writer for National Geographic, moves beyond the blame game to tell the gripping story of what it was like, behind the scenes, moment by moment, in the struggle to kill Macondo. Here are the controversies, the miscalculations, the frustrations, and ultimately the technical triumphs of men and women who worked out of sight and around the clock for months to find a way to plug the well.

The Deepwater Horizon disaster was an environmental 9/11. The government did not have the means to solve the problem; only the private sector had the tools, and it didn’t have the right ones as the country became haunted by Macondo’s black plume, which was omnipresent on TV and the Internet. Remotely operated vehicles, the spaceships of the deep, had to perform the challenging technical ma-neuvers on the seafloor. Engineers choreographed this robotic ballet and crammed years of innovation into a single summer. As he describes the drama in Houston, Achenbach probes the government investigation into what went wrong in the deep sea. This was a confounding mystery, an engineering whodunit. The lessons of this tragedy can be applied broadly to all complex enterprises and should make us look more closely at the highly engineered society that surrounds us.

Achenbach has written a cautionary tale that doubles as a technological thriller.
Joel Achenbach is a reporter for The Washington Post, and the author of six previous books, including The Grand Idea, Captured by Aliens and Why Things Are. He started the Washington Post's first blog, Achenblog, and has worked on the newspaper's national Style magazine and Outlook staffs. He regularly contributes science articles to National Geographic. A native of Gainesville, Florida and a 1982 graduate of Princeton University, he lives in Washington, D.C. with his wife and three children.
Advance Praise for


A Hole at the Bottom of the Sea

“After all the spilled oil and spilled ink, this book stands as the most enthralling tale of the interminable Gulf drilling disaster of 2010. Achenbach has a rare talent for making the alien world of offshore oil accessible. Telling a harrowing story of humans wrestling with a technological and environmental crisis beyond their control, he gives us an inside perspective on torturous decision-making under the watchful eyes of a nation.”
--Tyler Priest, University of Houston, Senior Policy Analyst, National Commission on the BP Deepwater Horizon Oil Spill and Offshore Drilling

“A brilliant expose of what occurred behind the scene. The readers will be enthralled. Anyone who is an energy user must read this book. That means everyone since it is hard to live without consuming energy.”
--Greg McCormack- Former Director of the Petroleum Extension service at the University of Texas

“A high-stakes adventure story, masterfully told.”
--Robert Wright, author of The Evolution of God and Nonzero: The Logic of Human
Destiny

"Here's what really happened at the spill -- a compelling look behind the curtain. Joel Achenbach, one of America's best journalists, digs up thousands of previously undisclosed documents to weave a deeply human story of failure, heroism, and the high price of oil addiction."
--David Von Drehle, author Triangle: The Fire That Changed America