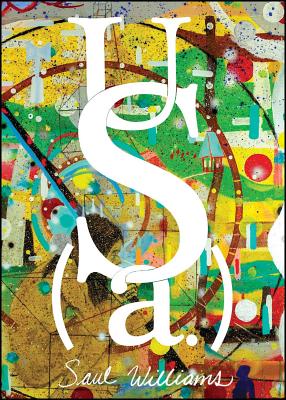 By Saul Williams
List Price: $16.00
Our Price: $15.00
(Save: $1.00 6%)
On Our Shelves Now
In his greatly anticipated new full-length book of poetry, the first since The Dead Emcee Scrolls in 2006, “the poet laureate of hip-hop” (CNN) Saul Williams presents his ideas, observations, realizations, dreams, and questions about the state of America, the American psyche, and what it means to be American.

After four years abroad, Williams returned to the United States and found his head twirling with thoughts on race, class, gender, finance, freedom, guns, cooking shows, dog shows, superheroes, not-so-super politicians—everything that makes up our country. US(a.) is a collection of poems that embodies the spirit of a culture that questions sentiments and realities, embracing a cross-section of pop culture, hip-hop, and the greater world politic of the moment. Williams explores what social media may only hint at—times and realities have changed; there is a connect and a disconnect. We are wirelessly connected to a past and path to which we are chained. Saul Williams stops and frisks the moment, makes it empty its pockets, and chronicles what’s inside. Here is an extraordinary book that will find its place in the hands and minds of a new generation.
Saul Williams is an acclaimed poet, musician, and actor. The film Slam, which he cowrote and starred in, won the Grand Jury Prize at the Sundance Film Festival (1998), and the Camera d’Or at the Cannes Film Festival. He has contributed to The New York Times, voiced Jean-Michel Basquiat in Downtown 81, and cut records with Rick Rubin and Trent Reznor. He has spoken at more than 200 universities where his poetry has been added to the curriculum of dozens of creative writing programs, and has taught poetry/performance workshops around the world. He recently starred in the Broadway musical Holler If Ya Hear Me. His books include S/HE, ,said the shotgun to the head., and The Dead Emcee Scrolls. He lives in New York. Visit his website at SaulWilliams.com.