The Guarded Gate: Bigotry, Eugenics, and the Law That Kept Two Generations of Jews, Italians, and Other European Immigrants Out of America (Paperback) 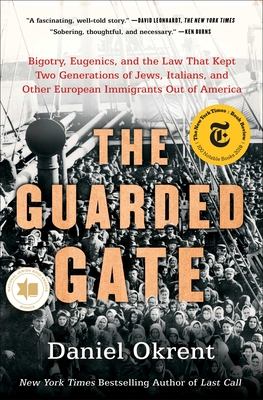 The Guarded Gate: Bigotry, Eugenics, and the Law That Kept Two Generations of Jews, Italians, and Other European Immigrants Out of America (Paperback)

From the widely celebrated New York Times bestselling author of Last Call—this “rigorously historical” (The Washington Post) and timely account of how the rise of eugenics helped America keep out “inferiors” in the 1920s is “a sobering, valuable contribution to discussions about immigration” (Booklist).

A forgotten, dark chapter of American history with implications for the current day, The Guarded Gate tells the story of the scientists who argued that certain nationalities were inherently inferior, providing the intellectual justification for the harshest immigration law in American history. Brandished by the upper class Bostonians and New Yorkers—many of them progressives—who led the anti-immigration movement, the eugenic arguments helped keep hundreds of thousands of Jews, Italians, and other unwanted groups out of the US for more than forty years.

Over five years in the writing, The Guarded Gate tells the complete story from its beginning in 1895, when Henry Cabot Lodge and other Boston Brahmins launched their anti-immigrant campaign. In 1921, Vice President Calvin Coolidge declared that “biological laws” had proven the inferiority of southern and eastern Europeans; the restrictive law was enacted three years later. In his trademark lively and authoritative style, Okrent brings to life the rich cast of characters from this time, including Lodge’s closest friend, Theodore Roosevelt; Charles Darwin’s first cousin, Francis Galton, the idiosyncratic polymath who gave life to eugenics; the fabulously wealthy and profoundly bigoted Madison Grant, founder of the Bronx Zoo, and his best friend, H. Fairfield Osborn, director of the American Museum of Natural History; Margaret Sanger, who saw eugenics as a sensible adjunct to her birth control campaign; and Maxwell Perkins, the celebrated editor of Hemingway and Fitzgerald. A work of history relevant for today, The Guarded Gate is “a masterful, sobering, thoughtful, and necessary book” that painstakingly connects the American eugenicists to the rise of Nazism, and shows how their beliefs found fertile soil in the minds of citizens and leaders both here and abroad.
Daniel Okrent was the first public editor of The New York Times, editor-at-large of Time, Inc., and managing editor of Life magazine. He worked in book publishing as an editor at Knopf and Viking, and was editor-in-chief of general books at Harcourt Brace. He was also a featured commentator on two Ken Burns series, and his books include Last Call, The Guarded Gate, and Great Fortune, which was a finalist for the 2004 Pulitzer Prize in history. He lives in Manhattan and on Cape Cod with his wife, poet Rebecca Okrent.
“The story of this triumph of ignorance has been told before, but never more vividly than by Daniel Okrent. . . A rigorously historical work.” —The Washington Post

“[An] often surprising history. . . . The Guarded Gate is reminiscent of Okrent’s Last Call: The Rise and Fall of Prohibition (2010) in its elegant . . . prose and its focus on the unlikely alliances that converged to effect political change.” —The Boston Globe

“A frighteningly timely book about a particularly ugly period in American history, a bigotry-riddled chapter many thought was closed but that shows recent signs of reopening… One of the narrative's great strengths is the author's inclusion of dozens of minibiographies illuminating the backgrounds of the racist politicians and the promoters of phony eugenics ‘research’… [A] revelatory and necessary historical account.” —Kirkus Reviews

“[A] sweeping history.” —The New Yorker

“Engrossing… this fascinating study vividly illuminates the many injustices that the pseudoscience of eugenics inflicted on so many would-be Americans.” —Publishers Weekly

“A sobering, valuable contribution to discussions about immigration.” —Booklist

“[A] detailed, compulsively readable account . . . a must-read for anyone seeking a deeper understanding of the history of immigration in the United States—and how the past might be relevant to policy makers and citizens today.” —BookPage

“What’s so unsettling about Daniel Okrent’s spellbinding history of a previous immigration controversy is how it resonates with today’s debate. Insightful, unsparing, and totally absorbing, this book frames the discussion against a compelling historical backdrop that describes the gap between the American ideal and the American reality.” —Lawrence Wright, Pulitzer Prize-winning author of The Looming Tower and God Save Texas

“In The Guarded Gate, Daniel Okrent has again taken a largely forgotten epoch in American history and brilliantly brought it back to life. Written with a grace that any novelist would envy, Okrent’s book tells the story of the immigration battles of the early twentieth century in a way that’s both fascinating on its own terms, but also, alas, all-too-relevant to today’s news.” —Jeffrey Toobin, CNN, author of American Heiress

“Our two oceans have protected and insulated us, but they have also helped to incubate less attractive features. Daniel Okrent artfully and faithfully records our (earlier) dismal record on immigration and how those home-grown racist and xenophobic policies metastasized into exports with horrific worldwide consequences. This is a masterful, sobering, thoughtful, and necessary book.” —Ken Burns

“The Guarded Gate delivers a timely history of anti-immigrant fever centered in the elite eugenics movement a century ago. In this masterful narrative, sprinkled with wit, Daniel Okrent shows how the lesser angels of our heritage ‘depopulated Ellis Island as if by epidemic,’ leading to cycles of disgrace and reform.” —Taylor Branch, Pulitzer Prize-winning author of Parting the Waters: America in the King Years, 1954-63

“Daniel Okrent is a gifted social historian. In this powerful, fast-paced, and highly relevant chronicle of bad science and fearful prejudice, Okrent helps us understand how and why our country lost its way about a century ago. Read it so that history does not find new ways of repeating itself.” —Evan Thomas, author of The War Lovers

“If you think we have reached peak stupidity — that America’s per capita quantity has never been higher — there is solace, of sorts, in Daniel Okrent’s guided tour through the immigration debate that was heading toward a nasty legislative conclusion a century ago.” —George F. Will, The Washington Post

“Engrossing... It’s a grim and sordid story, but Okrent is a companionable, witty, and judicious guide.” —Commentary Magazine