Picturing the Proletariat: Artists and Labor in Revolutionary Mexico, 1908–1940 (Paperback) 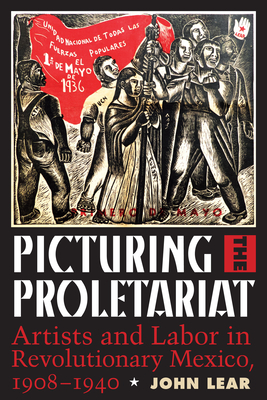 Picturing the Proletariat: Artists and Labor in Revolutionary Mexico, 1908–1940 (Paperback)

In the wake of Mexico’s revolution, artists played a fundamental role in constructing a national identity centered on working people and were hailed for their contributions to modern art. Picturing the Proletariat examines three aspects of this artistic legacy: the parallel paths of organized labor and artists’ collectives, the relations among these groups and the state, and visual narratives of the worker. Showcasing forgotten works and neglected media, John Lear explores how artists and labor unions participated in a cycle of revolutionary transformation from 1908 through the presidency of Lázaro Cárdenas (1934–1940). Lear shows how middle-class artists, radicalized by the revolution and the Communist Party, fortified the legacy of the prerevolutionary print artisan José Guadalupe Posada by incorporating modernist, avant-garde, and nationalist elements in ways that supported and challenged unions and the state. By 1940, the state undermined the autonomy of radical artists and unions, while preserving the image of both as partners of the “institutionalized revolution.”

This interdisciplinary book explores the gendered representations of workers; the interplay of prints, photographs, and murals in journals, in posters, and on walls; the role of labor leaders; and the discursive impact of the Spanish Civil War. It considers “los tres grandes”—Rivera, Siquieros, and Orozco—while featuring lesser-known artists and their collectives, including Saturnino Herrán, Leopoldo Méndez, Santos Balmori, and the League of Revolutionary Writers and Artists (LEAR). The result is a new perspective on the art and politics of the revolution.

John Lear is a professor of history and Latin American studies at the University of Puget Sound. His publications include Workers, Neighbors and Citizens: The Revolution in Mexico City and Chile’s Free Market Miracle: A Second Look.
Elegantly written...[Lear's] critical reading of the images is as sensitive to issues of gender as to distinctions of political affiliation and economic theory, and the study makes an important contribution to both visual culture studies and labor history.
— CHOICE

With his focus on labour, interdisciplinary approach, and deep research, Lear has produced an original historical study that not only expands our knowledge of Mexico's revolutionary and post-revolutionary eras, but one that also provides engaging insights for those who study art history and labour history as well.
— Bulletin of Latin American Research

Written in an engaging style and including a generous sampling of prints, Picturing the Proletariat is a major contribution to Mexican cultural history, to the history of Mexican art, and to the history of working-class culture generally. It will make readers better appreciate the influences that shaped Diego Rivera’s exalted representations of the proletarian man.
— Labor: Studies in Working-Class History

[Lear's] illustrations…carry his narrative as well as the written text. His is a unique study of a popular culture in a society undergoing radical renovation.
— New Politics

A piece of lucid and informative history…a fine, original, well-crafted study of the Mexican art and artists during the radical decades of the Mexican revolution.
— Latin American Research Review

Even though [art, labor, and politics] dominate the historiography on modern Mexico, this thoroughly research and copiously illustrated book is a welcome addition. John Lear offers expert analysis of visual culture, a feature often lacking in the historical literature on labor politics...Lear's book will...reward experts and novices alike as the topic is inherently fascinating, and the illustrations exemplify the best of Mexico's proletarian art.
— Hispanic American Historical Review