Flying Under the Radar with the Royal Chicano Air Force: Mapping a Chicano/a Art History (Paperback) 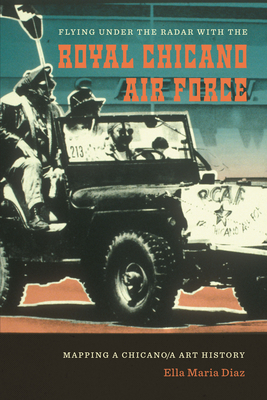 Flying Under the Radar with the Royal Chicano Air Force: Mapping a Chicano/a Art History (Paperback)

The Royal Chicano Air Force produced major works of visual art, poetry, prose, music, and performance during the second half of the twentieth century and first decades of the twenty-first. Materializing in Sacramento, California, in 1969 and established between 1970 and 1972, the RCAF helped redefine the meaning of artistic production and artwork to include community engagement projects such as breakfast programs, community art classes, and political and labor activism. The collective’s work has contributed significantly both to Chicano/a civil rights activism and to Chicano/a art history, literature, and culture.

Blending RCAF members’ biographies and accounts of their artistic production with art historical, cultural, and literary scholarship, Flying under the Radar with the Royal Chicano Air Force is the first in-depth study of this vanguard Chicano/a arts collective and activist group. Ella Maria Diaz investigates how the RCAF questioned and countered conventions of Western art, from the canon taught in US institutions to Mexican national art history, while advancing a Chicano/a historical consciousness in the cultural borderlands. In particular, she demonstrates how women significantly contributed to the collective’s output, navigating and challenging the overarching patriarchal cultural norms of the Chicano Movement and their manifestations in the RCAF. Diaz also shows how the RCAF’s verbal and visual architecture—a literal and figurative construction of Chicano/a signs, symbols, and texts—established the groundwork for numerous theoretical interventions made by key scholars in the 1990s and the twenty-first century.