Adventures of a Ballad Hunter (Paperback) 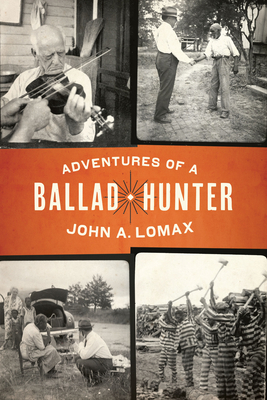 Adventures of a Ballad Hunter (Paperback)

Growing up beside the Chisholm Trail, captivated by the songs of passing cowboys and his bosom friend, an African American farmhand, John A. Lomax developed a passion for American folk songs that ultimately made him one of the foremost authorities on this fundamental aspect of Americana. Across many decades and throughout the country, Lomax and his informants created over five thousand recordings of America’s musical heritage, including ballads, blues, children’s songs, fiddle tunes, field hollers, lullabies, play-party songs, religious dramas, spirituals, and work songs. He acted as honorary curator of the Archive of American Folk Song at the Library of Congress, directed the Slave Narrative Project of the WPA, and cofounded the Texas Folklore Society. Lomax’s books include Cowboy Songs and Other Frontier Ballads, American Ballads and Folk Songs, Negro Folk Songs as Sung by Leadbelly, and Our Singing Country, the last three coauthored with his son Alan Lomax.

Adventures of a Ballad Hunter is a memoir of Lomax’s eventful life. It recalls his early years and the fruitful decades he spent on the road collecting folk songs, on his own and later with son Alan and second wife Ruby Terrill Lomax. Vibrant, amusing, often haunting stories of the people he met and recorded are the gems of this book, which also gives lyrics for dozens of songs. Adventures of a Ballad Hunter illuminates vital traditions in American popular culture and the labor that has gone into their preservation.

John A. Lomax (1867–1948) recorded classics such as “Home on the Range” and “Goodnight Irene” and with son Alan helped launch the musical careers of Leadbelly and Pete Seeger. His extensive recordings and papers are housed in the Library of Congress and the Dolph Briscoe Center for American History at the University of Texas at Austin.
It is hard to overstate the influence that the Lomaxes had on the subsequent interest in and development of North American song; equally, it is difficult for the modern reader to conceive of the disdain in which folk music was held hitherto. In the end few would disagree with Shirley Collins that Adventures of a Ballad Hunter is 'an essential part of American history'.
— Times Literary Supplement

An honest account of the life of an important collector and promoter of folk music and as such deserves to be widely read.
— Old Time News

Essential reading for neo-folkies, alt-country fans, blues enthusiasts, and most other stripes of music lover.
— Kirkus

Lomax preserved the voices of Americans from fading and along the way captures a bygone era when Americas sang for one another and for themselves. This memoir illustrates the urgency of songs in the lives of a diverse people.
— Great Plains Quarterly

[Adventures of a Ballad Hunter] is a treasure trove of disconnected tales, from [Lomax's] early days in Bosque County memorizing what the cowboys along the Chisholm trail sang to calm their dogies to his harrowing visits to prison farms in the Deep South, where he discovered Huddie William 'Lead Belly' Ledbetter, the folk and blues musician who later traveled the country with Lomax.
— Austin American Statesman