END_OF_DOCUMENT_TOKEN_TO_BE_REPLACED

Border Citizens: The Making of Indians, Mexicans, and Anglos in Arizona (Paperback) 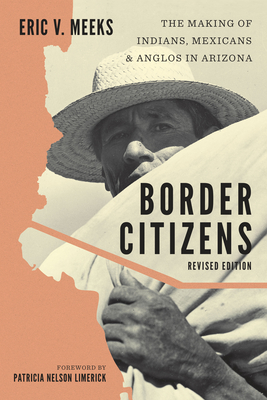 In Border Citizens, historian Eric V. Meeks explores how the racial classification and identities of the diverse indigenous, mestizo, and Euro-American residents of Arizona’s borderlands evolved as the region was politically and economically incorporated into the United States. First published in 2007, the book examines the complex relationship between racial subordination and resistance over the course of a century. On the one hand, Meeks links the construction of multiple racial categories to the process of nation-state building and capitalist integration. On the other, he explores how the region’s diverse communities altered the blueprint drawn up by government officials and members of the Anglo majority for their assimilation or exclusion while redefining citizenship and national belonging.The revised edition of this highly praised and influential study features dozens of new images, an introductory essay by historian Patricia Nelson Limerick, and a chapter-length afterword by the author. In his afterword, Meeks details and contextualizes Arizona’s aggressive response to undocumented immigration and ethnic studies in the decade after Border Citizens was first published, demonstrating that the broad-based movement against these measures had ramifications well beyond Arizona. He also revisits the Yaqui and Tohono O’odham nations on both sides of the Sonora-Arizona border, focusing on their efforts to retain, extend, and enrich their connections to one another in the face of increasingly stringent border enforcement.