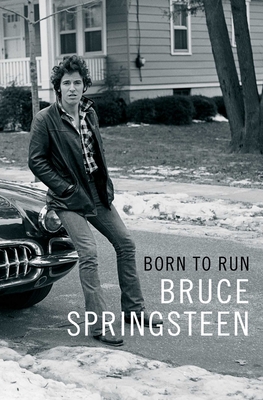 
On Our Shelves Now
The revelatory and wildly bestselling memoir by legendary rock star Bruce Springsteen: “Glorious…a philosophically rich ramble through a rock ’n roll life…It’s the lyric he was born to write” (USA TODAY, 4 out of 4 stars).

Over the past seven years, Bruce Springsteen has privately devoted himself to writing the story of his life. The result is “an utterly unique, endlessly exhilarating, last-chance-power-drive of a memoir” (Rolling Stone) that offers the same honesty, humor, and originality found in his songs.

He describes growing up Catholic in Freehold, New Jersey, amid the poetry, danger, and darkness that fueled his imagination, leading up to the moment he refers to as “The Big Bang”: seeing Elvis Presley’s debut on The Ed Sullivan Show. He vividly recounts his relentless drive to become a musician, his early days as a bar band king in Asbury Park, and the rise of the E Street Band. With disarming candor, he also tells for the first time the story of the personal struggles that inspired his best work.

Rarely has a performer told his own story with such force and sweep. Like many of his songs (“Thunder Road,” “Badlands,” “Darkness on the Edge of Town,” “The River” “Born in the U.S.A,” “The Rising,” and “The Ghost of Tom Joad,” to name just a few), Bruce Springsteen’s autobiography is written with the lyricism of a singular songwriter and the wisdom of a man who has thought deeply about his experiences.

“Both an entertaining account of Springsteen’s marathon race to the top and a reminder that the one thing you can’t run away from is yourself” (Entertainment Weekly), Born to Run is much more than a legendary rock star’s memoir. This book is a “a virtuoso performance, the 508-page equivalent to one of Springsteen and the E Street Band's famous four-hour concerts: Nothing is left onstage, and diehard fans and first-timers alike depart for home sated and yet somehow already aching for more” (NPR).
Bruce Springsteen has been inducted into the Rock and Roll Hall of Fame, the Songwriters Hall of Fame, and the New Jersey Hall of Fame. He is the recipient of twenty Grammy Awards, the Academy Award, and the Kennedy Center Honors. He lives in New Jersey with his family. His latest work, together with Barack Obama, is Renegades: Born in the USA, a candid and entertaining collection of conversations that expand on their groundbreaking Higher Ground podcast.
“Astonishing.”
—Vanity Fair

“Intensely satisfying...Born to Run is, like his finest songs, closely observed from end to end. His story is intimate and personal, but he has an interest in other people and a gift for sizing them up..”
—Dwight Garner, The New York Times

“Springsteen can write—not just life-­imprinting song lyrics but good, solid prose that travels all the way to the right margic...And like a fabled Springsteen concert—always notable for its deck-clearing thoroughness —Born to Run achieves the sensation that all the relevant questions have been answered by the time the lights are turned out. He delivers the story of Bruce—in digestibly short chapters—via an informally steadfast Jersey plainspeak that’s worked and deftly detailed and intimate with its readers—cleareyed enough to say what it means when it has hard stories to tell, yet supple enough to rise to occasions requiring eloquence—sometimes rather pleasingly subsiding into the syntax and rhythms of a Bruce Springsteen song."
—Richard Ford, The New York Times Book Review.

“A virtuoso performance, the 508-page equivalent to one of Springsteen and the E Street Band's famous four-hour concerts: Nothing is left onstage, and diehard fans and first-timers alike depart for home sated and yet somehow already aching for more.”
—NPR

"Kinetic...The ultimate rock star shares like he's got one last chance to make it real. It's like sitting next to Springsteen in the campfire light hearing his life story -- you'll be begging for another exhilarating refrain."
—People (Book of the Week)

“Excellent...very funny....eminently readable and engaging. Springsteen was also born to write. He has an active, energetic style that is part Jack Kerouac and part Instagram post.”
—Asbury Park

“Born to Run has a compelling narrative and an organized structure worthy of a Catholic schoolboy of the 1950s….Mr. Springsteen writes fluidly about subjects light, dark and darker. He’s funny and solemn, tender and insightful.  In Born to Run, he risks his mythic stature, but he emerges as more substantial, more admirable.  Now Mr. Springsteen isn’t merely a star.  He is a man – a son, a husband, a father and a friend – willing to share what he’s learned.”
—Wall Street Journal

“Richly rewarding….Bruce Springsteen proves that he has taken on life fully engaged both in living and examining it, and in doing so, he’s delivered a story as profoundly inspiring as his best music….It’s alternately brutally honest, philosophically deep, stabbingly funny and, perhaps most important, refreshingly humble.”
—Los Angeles Times

"A master storyteller.... the language of his memoir often sings and leaps off the page with alliteration and pulse, especially when he's rhapsodizing about rock 'n' roll."
—Will Hermes, NPR

“Both an entertaining account of Springsteen’s marathon race to the top and a reminder that the one thing you can’t run away from is yourself.”
—Entertainment Weekly

"Bruce Springsteen is the bard of lost American dreams....The origin of poetry, thought William Wordsworth, was emotion recollected in tranquillity. That motto describes both the content of Mr Springsteen’s book and the appeal of his songs, many of which look back on youthful traumas from a mature perspective.”
—The Economist

“Glorious…a philosophically rich ramble through a rock 'n roll life…. Reading his intimate look back on a remarkable yet troubled life, it’s safe to say that Bruce’s aesthetic wouldn’t be complete without this long-form Song of Springsteen. It’s the lyric he was born to write.”
—USA Today (four stars out of four)

“Where Springsteen soars — both as musician and writer — is in his ability to bear witness, not only to his own inner life but to the lives of those left behind in the post-industrial wastelands of this nation. Springsteen made it out of Freehold, but he never turned away from the ‘grinding hypnotic power’ of the place and its people. Born to Run’ documents the unlikely rise of a rocker hellbent not on escape, but on reckoning with the moral failings of the world he was born into."
—Boston Globe

"A masterpiece….Bruce Springsteen could have put out a collection of recipes in Esperanto, cribbed from Campbell soup cans, and it would still be an international bestseller. Typically, he went the distance. And the result is nothing short of magnificent….I wish I could buy everyone a copy….This isn't just a book for Bruce fans, but for anyone who loves rock 'n' roll, the Shore or the last 40 years of Jersey pop-culture history. It's as epic as his recent four-hour concerts. And just as satisfying.”
—Jacqueline Cutler, NJ.com

"He must be conceded a magic with words: He can spin not only a yarn but often an extended analysis, too.... His disclosures here are rich, deep, and useful to help destigmatize mental illness."
—Slate