In the Midst of Winter: A Novel (Paperback) 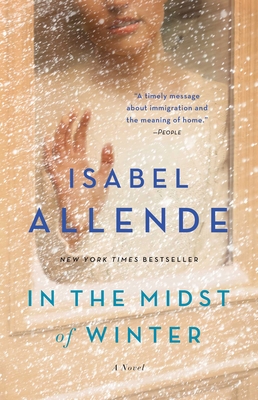 In the Midst of Winter: A Novel (Paperback)

“By the end of In the Midst of Winter, I felt as though I'd had a south-of-the-border history lesson. The title, which comes from an Albert Camus quote, takes on many meanings in the story. Two NYU professors, Richard Bowmaster and his tenant, Luc?a Maraz, both in their 60s, have each resigned themselves to a ho-hum existence. When a snowstorm accident brings Evelyn Ortega, a housekeeper for a wealthy family, into the picture, these three lives become entangled and anything but boring. The story takes the reader from Brooklyn to Mexico, Guatemala, Chile, and Brazil as the three characters bring their unique histories to the story. Allende's new novel is both a love story and a story of the plight of the immigrant. This is a page-turner and a wonderful book club choice.”
— Mamie Potter (M), Quail Ridge Books, Raleigh, NC

New York Times and worldwide bestselling author Isabel Allende returns with a sweeping novel that journeys from present-day Brooklyn to Guatemala in the recent past to 1970s Chile and Brazil that offers “a timely message about immigration and the meaning of home” (People).

During the biggest Brooklyn snowstorm in living memory, Richard Bowmaster, a lonely university professor in his sixties, hits the car of Evelyn Ortega, a young undocumented immigrant from Guatemala, and what at first seems an inconvenience takes a more serious turn when Evelyn comes to his house, seeking help. At a loss, the professor asks his tenant, Lucia Maraz, a fellow academic from Chile, for her advice.

As these three lives intertwine, each will discover truths about how they have been shaped by the tragedies they witnessed, and Richard and Lucia will find unexpected, long overdue love. Allende returns here to themes that have propelled some of her finest work: political injustice, the art of survival, and the essential nature of—and our need for—love.
Born in Peru and raised in Chile, Isabel Allende is the author of a number of bestselling and critically acclaimed books, including The House of the Spirits, Of Love and Shadows, Eva Luna, The Stories of Eva Luna, Paula, and The Japanese Lover. Her books have been translated into more than thirty-five languages and have sold more than 65 million copies worldwide. She is the receipient of the Medal for Distinguished Contribution to American Letters, and she divides her time between California and Chile.
"A timely message about immigration and the meaning of home."
— People

"It’s when revealing the characters’ harrowing past lives in other countries that the generous and unflagging energy that characterized Allende’s debut, The House of the Spirits, can most clearly be felt."
— San Francisco Chronicle

“[In the Midst of Winter] forthrightly embraces both harsh realities and whimsy, pleasure and pain in this buoyant adventure, a heartfelt story of resilience and respect that seems just the thing to help us through these darkest of days in our land of exiles.”
— The Seattle Times

"Allende uses imagination to help readers gain a better understanding of what the immigrant experience is really like for many people in this country."
— Chicago Reader

"Devotees of Allende’s forays into magical realism (The House of Spirits, The Stories of Eva Luna) will find the universe she creates here—an account of earthly lives lived in an earthly setting—more madcap and macabre."
— Newsday

"A syntactically beautiful story with the twists and turns of a telenovela and warmth at its center."
— Minneapolis Star Tribune

"Allende's latest tale is heartfelt and raw... The interactions between the characters is well thought out and deep. Readers will come to love them and experience the heartbreak and joy both of their past, present, and future."

"The lesson is clear in both book and life—passion is possible. So is survival and change and making a difference in the world, in Isabel Allende’s grand and inimitable style."
— The New Orleans Advocate

"Isabel Allende brings her poetic and compassionate eye to In the Midst of Winter, [which] is being compared with her masterpiece The House of the Spirits."

"The contrast of a modern-day mystery with the characters' magical worlds of South American culture, makes In the Midst of Winter an absorbing, page-turning adventure."
— Woodbury

"[Allende] continues to beguile readers with themes of social justice and love, tied together with a bit of magical realism. In this vivid and fast-paced work of fiction, [she] weaves a suspenseful love story, rendering [its] central trio with generosity, spirit, and passion."
— National Book Reivew

"Filled with Allende's signature lyricism and ingenious plotting, the book delves wonderfully into what it means to respect, protect, and love."
— Publishers Weekly (starred review)

"Allende has a rare and precious gift for simultaneously challenging and entrancing readers by dramatizing with startling intimacy such dire situations as the desperation behind illegal immigration and domestic violence, then reveling, a page later, in spiritual visions or mischievous sexiness or heroic levity."
— Booklist (starred review)

"This winter's tale has something to melt each frozen heart."
— Kirkus