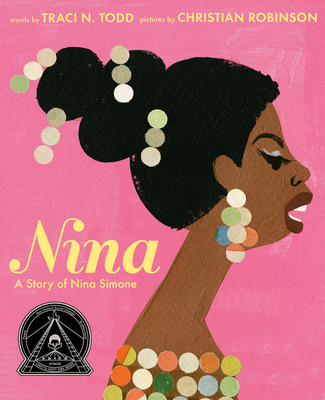 Born Eunice Kathleen Waymon in small town North Carolina, Nina Simone was a musical child. She sang before she talked and learned to play piano at a very young age. With the support of her family and community, she received music lessons that introduced her to classical composers like Bach who remained with her and influenced her music throughout her life. She loved the way his music began softly and then tumbled to thunder, like her mother's preaching, and in much the same way as her career. During her first performances under the name of Nina Simone her voice was rich and sweet but as the Civil Rights Movement gained steam, Nina's voice soon became a thunderous roar as she raised her voice in powerful protest in the fight against racial inequality and discrimination.
When Chicago native Traci N. Todd was born, her father decided her initials should stand for dynamite, just like his. He raised her on Ray Charles and Nina Simone, and her mother read her every good book. Traci grew up to become a children's book editor and currently lives in Jackson Heights, Queens where she writes, edits, and listens to Ray Charles and Nina Simone, while her partner draws comic books.

Christian Robinson received a Caldecott Honor and a Coretta Scott King Illustrator Honor for his art in Last Stop on Market Street. He is the author and illustrator of the picture books Another and You Matter, and he has illustrated many more, including Carmela Full of Wishes, the Gaston and Friends series, School's First Day of School, and The Smallest Girl in the Smallest Grade. You can visit Christian at theartoffun.com or on Instagram @theartoffun.
Praise for Nina:
A 2022 Bank Street Best Children’s Book of the Year
A 2022 ALA Notable Children’s Book
A 2022 NCTE Orbis Pictus Award Winner
A 2022 Jane Addams Children’s Book Award Finalist
A 2022 ALA Rise: A Feminist Book Project List Pick
A 2022 NCTE/CLA Notable Children’s Books in the Language Arts Award Winner
A 2022 ILA Notable Book for a Global Society Award Winner
A 2022 NCSS-CBC Notable Social Studies Trade Book Pick
A 2021 Publishers Weekly Best Book
A 2021 Kirkus Best Book
A 2021 Horn Book Fanfare List Pick
A 2021 Booklist Editors' Choice
A 2021 New York Public Library Best Book Pick
A 2021 Chicago Public Library Best Book Pick
A 2021 Black Caucus American Library Association Best of the Best Booklist Pick

★ “Nina Simone's beauty and talent is given prominent expression by multiaward-winning Robinson in this picture-book biography . . . while Todd's prose eloquently tells her story from childhood to fame . . . A worthy biography for all collections and especially for those that serve music-loving children.” —Booklist, starred review

★ “Some storytellers use words to entertain listeners and readers, while others share their tales in song. Nina: A Story of Nina Simone gracefully brings the life of one such legendary musician into readers’ hearts. . . Traci N. Todd’s straightforward narration is honest and candid . . . [and] fans of Caldecott Honor illustrator Christian Robinson (Last Stop on Market Street, The Bench) will immediately recognize the bold, distinct shapes that are his hallmark. Robinson outdoes himself here . . . reflecting on the strength, hope and revolution she conveyed in her music.” –BookPage, starred review

★ “Todd ends her unflinching narrative with a perfectly placed, direct-address line: “And when she sang of Black children—you lovely, precious dreams—her voiced sounded like hope.” This unexpected, yet needed, outpouring of love is the perfect end to a stunning book.” –Horn Book Review, starred review

★ “Discussions of racism and resistance are undertaken with a skillful hand, not exceeding the tone or maturity level appropriate for young readers. Robinson’s jewel-tone artwork is colorful, engaging, and complements Todd’s lyrical text . . . An excellent and magnetic biography, this book is highly recommended in all elementary collections and should be considered for libraries serving older students.”—School Library Journal, starred review

“Luminous . . . [and] visually rapturous . . . Robinson imbues Nina with sumptuous colors . . . His elegantly simple figures recall the work of Ezra Jack Keats and occasionally Charles M. Schulz. . . Simone’s precocity, which shines through . . . is nurtured in intimate moments sitting on her father’s lap at the keyboard, letting him guide her as they play “good-time jazz” together, and on Sundays when she provides the rhythmic and “rolling” accompaniment to her minister mother’s sermons. Todd brings nuance to Simone’s musicianship in ways that should prove instructive to curious young readers. . . The journey to merge her astonishing virtuosity and professional achievements with her bold activism is summed up by the arresting portrait of the artist seated at her baby grand and flanked by four little Black girls.” —The New York Times Book Review