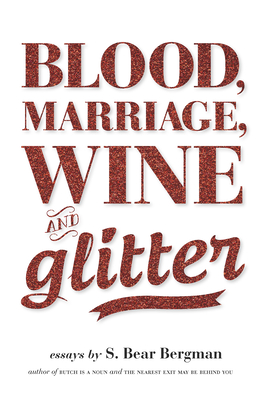 S. Bear Bergman is an acclaimed writer and lecturer who travels regularly across North America to speak on trans issues. Bear's first two books, Butch Is a Noun and The Nearest Exit May Be Behind You, are considered seminal texts on the subject of trans life. In his third essay collection, Bear enters, describes, and rearranges our ideas about family as a daughter, husband, father, and friend. In Bear's extended family orchard, drag sisters, sperm-donor's parents, Sparkles and other relations provide more branches of love, support, and sustenance than a simple family tree. Defiantly queer yet full of tenderness and hilarity, Blood, Marriage, Wine & Glitter is a beautifully thought-provoking book that redefines the notion of what family is and can be.

S. Bear Bergman is the author of two books, the Lambda Award-nominated The Nearest Exit May Be Behind You (Arsenal Pulp, 2009), and Butch is a Noun, first published by Suspect Thoughts in 2006 and reissued in a new edition by Arsenal Pulp Press in 2010. Bear is also the co-editor (with Kate Bornstein) of the Lambda Award-winning anthology Gender Outlaws: The Next Generation (Seal, 2010). A longtime activist and public speaker, Bear continues to work at the intersection between and among gender, sexuality, and culture. Originally from Connecticut, Bear now lives with hir husband and son in Toronto.