END_OF_DOCUMENT_TOKEN_TO_BE_REPLACED

Wade in the Water: Poems (Paperback) 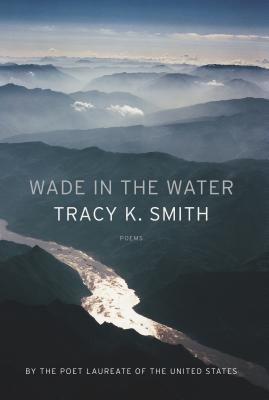 “In Wade in the Water, Smith masterfully makes herself into a medium through which the voices of other (forgotten) people can become poetry. 'I Will Tell You the Truth About This?' is a haunting and beautiful poem written using the letters and statements of African-Americans who enlisted as soldiers in the Civil War. Here, Smith is simultaneously the declarer and the creator of a space wherein others may be given room to declare. It is this balancing act that brings out the heart and beauty of Wade in the Water. The impersonal is made intimate, the world is made individual, and through it all, Smith guides us with true poetic sense. Wade in the Water is a necessary, beautiful book!”
— Eli Sorich, Magers & Quinn Booksellers, Minneapolis, MN

Shortlisted for the T. S. Eliot Prize
Finalist for the Forward Prize for Best Collection

The extraordinary new poetry collection by Tracy K. Smith, the Poet Laureate of the United States

Even the men in black armor, the ones
Jangling handcuffs and keys, what else

Are they so buffered against, if not love’s blade
Sizing up the heart’s familiar meat?

Love: naked almost in the everlasting street,
Skirt lifted by a different kind of breeze.

—from “Unrest in Baton Rouge”

In Wade in the Water, Tracy K. Smith boldly ties America’s contemporary moment both to our nation’s fraught founding history and to a sense of the spirit, the everlasting. These are poems of sliding scale: some capture a flicker of song or memory; some collage an array of documents and voices; and some push past the known world into the haunted, the holy. Smith’s signature voice—inquisitive, lyrical, and wry—turns over what it means to be a citizen, a mother, and an artist in a culture arbitrated by wealth, men, and violence. Here, private utterance becomes part of a larger choral arrangement as the collection widens to include erasures of The Declaration of Independence and the correspondence between slave owners, a found poem comprised of evidence of corporate pollution and accounts of near-death experiences, a sequence of letters written by African Americans enlisted in the Civil War, and the survivors’ reports of recent immigrants and refugees. Wade in the Water is a potent and luminous book by one of America’s essential poets.

Tracy K. Smith is the author of three previous poetry collections, including Life on Mars, winner of the Pulitzer Prize, and a memoir, Ordinary Light, which was a finalist for the National Book Award. She teaches at Princeton University.

“Smith’s new book is scorching in both its steady cognizance of America’s original racial sins . . . and apprehension about history’s direction. . . . These historical poems have a homely, unvarnished sort of grace.”—The New York Times

“The poems in Wade in the Water are full of memorable images nimbly put together by Smith’s exquisite sense of timing and her feel for the kind of language appropriate to the poem.”—The New York Times Book Review

“Smith brings great intelligence and sensitivity to her poems, leading readers deeper into other people’s stories—and ultimately into their own humanity.”—The Washington Post

“Smith’s poetry is an awakening itself.”—Vogue

“In these poems, with both gentleness and severity, Smith generously accepts what is an unusually public burden for an American poet, bringing national strife home, and finding the global in the local.”—NPR.org

“With formal precision and clarity, Smith’s poems dance the boundaries between private and public, give voice to the voiceless, and shine with a resolute spiritual vision.”—San Francisco Chronicle

“[Wade in the Water] considers the state of the union with characteristic grace. . . . Smith holds this chorus together quite beautifully, often embedding contrasting fragments of text and tone in classical forms and schemes.”—Harper’s

“Smith is the country’s poetic caretaker, calling both for collective reckoning and collective empathy.”—The Atlantic

“Wade in the Water . . . deftly covers 250 years of the American experience, from the refugee’s plight to a company’s toxic spill tothe complications of black motherhood.”—Mother Jones

“In lines that are as lyrical as they are wise . . . Smith makes connections between the current state of American culture and its history.”—BuzzFeed

“Tracy K. Smith presents a clear-eyed portrait of the present, reconsiders the past and offers love as an ethical response to injustice. . . . As Smith traverses time and tragedy, she returns to the idea that love is a radical and transformative force, one with a political and public function.”—Star Tribune (Minneapolis)

“We are in good worlds with Smith leading the poetic charge, as Wade in the Water attests.”—The Millions

“The poems in Wade in the Water are—in classic Smith fashion—gorgeously nuanced in music and in feeling and occasionally offbeat in their logic. . . . Smith lands on the power of art and its ability to pierce us ‘suddenly / By pillars of heavy light.’”—Poets.org

“Majestic. . . . This is a formally varied, masterful collection from the nation’s poet laureate.”—BookPage

“Bolstered by an array of sources, the poems gaze outward and observe with an incredibly perceptive eye. The past presses up against the present, and empathy hums consistently below as a driving force behind the collection’s explorations of religion, history, prejudice, and environmentalism.”—The Adroit Journal

“Readers will be moved by this carefully crafted collection. It is entirely new and innovative.”—New York Journal of Books

“Wade in the Water examines . . . injustice (political and personal) with sharp insight and telling detail. . . . While Smith repeatedly calls injustice and its perpetrators to account, her poems her poems also contain deep compassion and an insistence on hope.”—Shelf Awareness

“Tracy K. Smith weaves together past and present, personal and political in ways that are at once urgent and timeless.”—The Arkansas International

“On a craft level, these poems are impeccable. . . . I know brilliance when I read it and this book is brilliant.”—Roxane Gay, Goodreads

“Poetry requires acts of exquisite selection and distillation that Smith, poet laureate of the United States, performs with virtuosity and passion throughout her profoundly affecting fourth collection. . . . The sacred and the malevolent are astutely juxtaposed in this beautifully formed, deeply delving, and caring volume.”—Booklist, starred review

“For Smith, poetry is hospitable: accommodating whatever she is moved to write. Her work witnesses, protests and raises its own roof. . . . Smith emerges as a poet in charge of her own creation myth and a recorder of destructive realities.”—The Observer (UK)