END_OF_DOCUMENT_TOKEN_TO_BE_REPLACED

Invisible Enemies: The American War on Vietnam, 1975-2000 (Culture and Politics in the Cold War and Beyond) (Paperback) 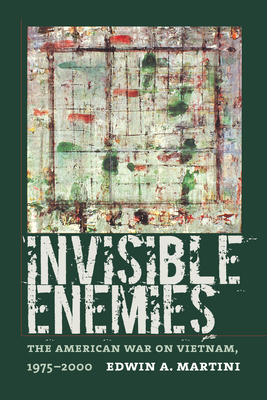 Beginning where most histories of the Vietnam War end, Invisible Enemies examines the relationship between the United States and Vietnam following the American pullout in 1975. Drawing on a broad range of sources, from White House documents and congressional hearings to comic books and feature films, Edwin Martini shows how the United States continued to wage war on Vietnam "by other means" for another twenty-five years. In addition to imposing an extensive program of economic sanctions, the United States opposed Vietnam's membership in the United Nations, supported the Cambodians, including the Khmer Rouge, in their decade-long war with the Vietnamese, and insisted that Vietnam provide a "full accounting" of American MIAs before diplomatic relations could be established. According to Martini, such policies not only worked against some of the stated goals of U.S. foreign policy, they were also in opposition to the corporate economic interests that ultimately played a key role in normalizing relations between the two nations in the late 1990s.

Martini reinforces his assessment of American diplomacy with an analysis of the "cultural front"—the movies, myths, memorials, and other phenomena that supported continuing hostility toward Vietnam while silencing opposing views of the war and its legacies. He thus demonstrates that the "American War on Vietnam" was as much a battle for the cultural memory of the war within the United States as it was a lengthy economic, political, and diplomatic campaign to punish a former adversary.

Edwin A. Martini is assistant professor of history at Western Michigan University.

"Original, lucid, and convincing—a powerful indictment of the vindictive postwar policies the United States leveled against the one nation that successfully resisted the heaviest bombing in world history."—Christian G. Appy, author of Patriots: The Vietnam War Remembered from All Sides

"There are not a lot of books that cover this subject, and none cover it so comprehensively. It is enormously valuable to have in one place a treatment of high-level political debates over diplomatic recognition and popular perceptions of Vietnam as rendered by Hollywood."—Andrew J. Rotter, author of The Path to Vietnam: The Origins of the American Commitment to Southeast Asia

"Martini should be commended for adding significantly to our understanding of the war after the war. . . . This is a first-rate book and a must reading for anyone interested in recent U.S. foreign policy."—Robert K. Brigham, Vassar College, H-Diplo Reviews

"Teachers of courses on the Vietnam War will find Invisible Enemies a useful source for bringing their class to the end of the twentieth century. Scholars of American foreign relations will appreciate a fresh and engaging approach to a topic that is sorely in need of historical study."—Matthew Masur, St. Anselm College, H-Diplo Reviews

"Invisible Enemies is an original and welcome addition to the existing literature on the Vietnam War. IN addition to providing a critique of American policy toward Vietnam after 1975, a period generally ignored by students of the war, Martini effectively combines the fields of diplomatic history and cultural studies. . . . [Invisible Enemies] is a work of scholarship that truly does transcend narrow disciplinary boundaries."—James McAllister, Williams College, H-Diplo Reviews

"In this well-written, excellently researched work, Edwin Martini argues that the American conflict with Vietnam did not end in 1975. Instead, he maintains that the U.S. launched a diabolical war by other means on communist Vietnam by imposing a ruinous economic and diplomatic embargo that persisted into the 1990s and only ended with the establishment of a Bilateral Trade Agreement in 2000."—The Register of the Kentucky Historical Society

"The real strength of this book is the way Martini weaves together the economic, political, and cultural threads of the period of the postwar war. . . . This is a well-documented book with value for advanced scholars yet written in a manner accessible to undergraduates"—The American Historical Review

"Martini's courageous book helps us to appreciate this irony, that diplomatic relations became possible only when reparations had been paid--by the Vietnamese to the United States."—Peace & Change