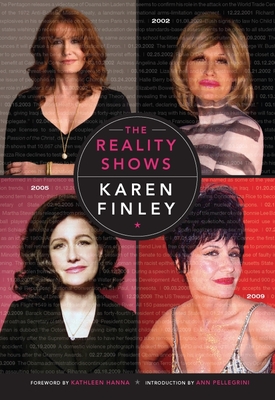 
On Our Shelves Now
Ms. Finley hasn't lost the power to disturb.--Ben Brantley, The New York Times No other performing artist has captured the psychological complexity of this decade as Karen Finley has. In her inimitable style, she has embodied some of the most troubling figures to cast a long shadow on the public imagination, and has envisioned a kind of catharsis within each drama: Liza Minnelli responds to the September 11 attacks; Terri Schiavo explains why Americans love a woman in a coma; Martha Stewart dumps George W. Bush during their tryst on the eve of the Republican National Convention; Silda Spitzer tells the former governor why "I'm sorry" just isn't enough; and the ghost of Jackie O cries, "Please stop looking at me The Reality Shows is a revelation of a decade by one of our greatest interpreters of popular and political culture.
Karen Finley is a New York-based artist whose raw and transgressive performances have long provoked controversy and debate. She has appeared and exhibited her visual art, performances and plays internationally. Her performances have been presented at Lincoln Center, New York City; The Guthrie, Minneapolis; American Repertory Theatre; The ICA in London; Harvard; The Steppenwolf in Chicago; and The Bobino in Paris. Her artworks are in numerous collections and museums including the Pompidou in Paris and Museum of Contemporary Art, Los Angeles. She is the author of many books including Shock Treatment, Enough is Enough, Living It Up, Pooh Unplugged, A Different Kind Of Intimacy: The Collected Writings of Karen Finley, and George & Martha. She edited Aroused: A Collection of Erotic Writings. Finley attended the San Francisco Art Institute receiving an MFA and honorary PhD. She has received numerous awards and fellowships including a Guggenheim, 2 Obies, 2 Bessies, Ms. magazine Woman of the Year, NARAL Person of the Year (which she shared with Anna Quindlen and Walter Cronkite), and NYSCA and NEA Fellowships. She has appeared in many independent films and appeared in the film Philadelphia. Kathleen Hanna is a musician, feminist activist, and zine writer. In the 90s she was the lead singer of the punk band Bikini Kill, before fronting the dance-punk band Le Tigre. In 1998, Hanna released a solo album under the name Julie Ruin. She has collaborated with a wide variety of musicians, appearing on records with numerous artists, including Joan Jett, Mike Watt, Atari Teenage Riot, Comet Gain, Green Day, Tim Green, Metal Church, Helter Skillet, Internal/External and Yoko Ono.